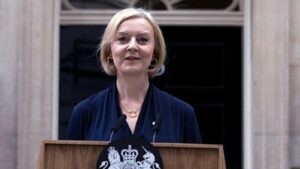 Liz Truss resigned on Thursday as UK’s prime minister, brought down just six weeks into the job following an economic programme that rattled financial markets, increased the living costs for voters and enraged most of her own party. The ruling Conservative party which continues to hold a big majority in the parliament will elect its new leader by October 28, it has said.

But the ebb and flow of British politics this year which has coincided with a severe economic crisis in the country is quite mind-boggling. In just four months, Britain has seen four finance ministers, three home secretaries and two prime ministers. Also, two monarchs!

The swapping of finance ministers back-to-back began with Indian-origin Rishi Sunak- being considered a frontrunner for the UK PM position- leaving the position in July, followed by his successor Nadhim Zahawi in September, both under the premiership of Boris Johnson. Under Liz Truss, Kwasi Kwarteng whose economic plan eventually resulted in Truss’ resignation, was sacked from his position by her in September. Currently, Jeremy Hunt holds the position of the finance minister.

Not only this, the home secretaries have also been changing- shuffling like a deck of cards- with Priti Patel, followed by Suella Braverman and then the incumbent Grant Shapps.

And then, of course, two prime ministers as scandal-hit Boris Johnson, who is reported to be eyeing the PM position again was followed by Liz Truss.

Britain has a new monarch too as King Charles III ascended to the throne following his mother- the symbol of stability- Queen Elizabeth II’s demise in September.

Never a dull moment in Britain, it seems!