Kedarnath Dham crash: Six people were aboard the plane. 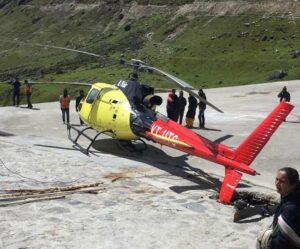 All six people who were aboard a chopper that crashed in Uttarakhand near the iconic Kedarnath Dham have died, officials have confirmed. The tragedy occurred when the chopper crashed at Garud Chatti, nearly 2 km from the Kedarnath Dham shrine. Chief Minister Pushkar Dhami has ordered a probe.

“Very sad news has been received about the casualties of some people in the unfortunate helicopter crash at Garuda Chatti near Kedarnath. The SDRF and district administration teams have reached the spot for relief and rescue work. A detailed inquiry has been ordered into this tragic incident,” he tweeted.

The helicopter – carrying pilgrims – was flying from Kedarnath to the Phata helipad. The SRDF (State Disaster Response Force) teams and local police were rushed to the accident site soon after the accident.

“The helicopter crash in Kedarnath is extremely unfortunate. We are in touch with the state government to ascertain the magnitude of the loss, and are constantly monitoring the situation,” Union Aviation Minister Jyotiraditya Scindia tweeted.

Uttarakhand SDRF Commandant Manikant Mishra confirmed the six deaths in the chopper crash, which was reported to have taken place minutes after the takeoff. Bad weather is believed to have caused the tragedy.

The chopper was operated by private firm – Ayan Aviation Pvt. Ltd – that provides heli services in the area. “As per the preliminary information received, a Bell 407 helicopter registered as VT-RPN belonging to a Delhi based Aryan Aviation crashed on the way from Kedarnath to Guptkashi,” an official said.

Visuals from the site showed debris spread all over the mountainous region. The accident had also sparked a fire.