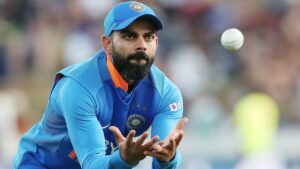 Bangladesh Cricket Board will be raising the controversial ‘fake fielding’ issue after the five-run loss to India at the T20 World Cup.

The match between India and Bangladesh in the 2022 T20 World Cup saw quite an eventful second innings; while Litton Das went ballistic over the Indian bowlers in the Powerplay, the rain-break shifted the momentum towards Rohit Sharma’s men as they made a brilliant comeback to secure a five-run win (DLS) in Adelaide. There were questions raised over the condition of the ground when the play resumed even as Bangladesh captain Shakib Al Hasan cleared that he had a detailed conversation with the umpires over the same.

Following the match, however, another incident came to light after Bangladesh wicketkeeper-batter Nurul Hasan pointed it out – a fake fielding attempt from the Indian team. The said incident took place before the rain break when Virat Kohli seemingly fake-fielded as openers Litton Das and Nazmul Hossain Shanto ran 2. The video from the incident eventually went viral on social media, with many in the Bangladesh cricket fraternity demanding a five-run penalty on India.

It has now been reported by Cricbuzz that the Bangladesh Cricket Board (BCB) will raise the concern in “the proper forum.” Bangladesh have said that umpires Marais Erasmus and Chris Brows failed to notice the incident. Interestingly, none of the two batters noticed Kohli’s action as well.

BCB’s cricket operation chairman Jalal Yunus stated that Shakib discussed the matter at length with the umpires, and also revealed that the Bangladesh skipper spoke about the wet condition of the field and asked the umpires if they can have more time drying the field.

“We have spoken about it. You have seen it in the TV and everything happened in front of you. There was one regarding fake throw and we have notified the umpires about the fake throw but he said he did not notice it and that is the reason he did not take the review. Shakib discussed a lot about it with Erasmus and even spoke with him after game,” Jalal said.

“Secondly, Shakib had spoken about the wet field and he asked that he can take some more time and let the field get dried and start the game after the field is dried. But… the umpires’ decision is final and that is reason there was no place for argument. There was only one decision whether you will play or not play.

“We have it in our head so that we can raise the issue in the proper forum,” Jalal concluded.