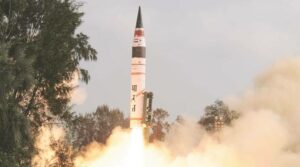 The announcement of India firing an submarine launched missile from INS Arihant and the surfacing of the most powerful USS West Virginia in Arabian Sea are part of strategic messaging to wolf warriors in China.

New Delhi: With the test trials and development stage of the medium-range nuclear Agni-P missile completed after October 21 test-firing, the latest generation weapon has moved closer to induction and mass production with Strategic Forces Command ready to conduct user trial of the delivery platform.

After induction into Strategic Forces Command arsenal, the missile will become the prime deterrent in the 1000-2000 km range with Agni-5 providing the full cover to India against regional adversaries. The Defence Research and Development Organization (DRDO) can produce a longer-range missile than Agni-5 provided the Modi government revises its nuclear options and gives approval to a longer-range delivery platform.

According to missile experts, the development trials of Agni-P are complete with three tests, the first one of which was conducted off Balasore on June 28, 2021, and second on December 18, 2021. The 10-meter-long missile with flexi nozzles and composite motor can be fired from mobile launchers and thus has a higher rate of survivability in the event of worst-case scenario.

While for India the winter months are normally used for test-firing and trials, the Agni-P trial came a day after US surprisingly announced the surfacing of top-of-the-line nuclear ballistic missile submarine USS Virginia at an undisclosed location in Arabian Sea. This was preceded by India announcing the user firing of submarine launched ballistic missile from its own ballistic missile submarine INS Arihant this month. This accompanied by deepening of Japan-Australia defence cooperation as well as public statement by US Pacific Commander that India was indispensable ally to Washington in the Indo-Pacific bodes well for the future of the QUAD grouping.

The strategic messaging both by the US and India in the Indo-Pacific came at the time when President Xi Jinping was on his way to get reelected the third time and become China’s new Chairman Mao and rival Washington as the numero uno military power in the world. That President Xi is totally in command of Chinese Communist Party was evident from the unceremonious exit of his predecessor Hu Jintao from the Saturday’s closing session of the party’s twice a decade orchestrated Congress. The consolidation of power by dictators President Xi and his “no limits” ally Russian President Vladimir Putin increases uncertainty in the world with Taiwan on Beijing’s and Ukraine on Moscow’s cross-sights.