India witnessed the induction of the first made-in-India light combat helicopter’ Prachand’ on Monday in the Air Force with Defence Minister Rajnath Singh in attendance. 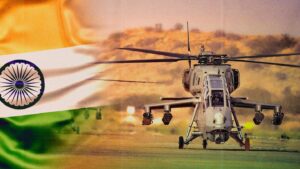 Speaking at the induction ceremony, Rajnath Singh said, “For a long time, there was a need for attack helicopters and during the 1999 Kargil war, its need was felt seriously. The LCH is a result of research & development for two decades. And its induction into the IAF is an important milestone in defence production.”

He added, “LCH is capable of dodging the enemy, carrying a variety of ammunition, and delivering it to the site quickly. LCH perfectly meets the needs of our armed forces in various terrains and it is an ideal platform for both our Army and Airforce.”

Ahead of the induction ceremony, the defence minister tweeted, “I would be in Jodhpur, Rajasthan tomorrow, 3rd October, to attend the Induction ceremony of the first indigenously developed Light Comat Helicopters (LCH). The induction of these helicopters will be a big boost to the IAF’s combat prowess. Looking forward to it.” (sic)

According to HAL, the light combat helicopter is the only attack helicopter in the world that can land and take-off at an altitude of 5,000 metres (16400 ft) with a considerable load of weapons and fuel, meeting the specific requirements of the Indian Armed Forces.

The helicopter is equipped with the requisite agility, manoeuvrability, extended range, high altitude performance and around-the-clock, all-weather combat capability. It would be a potent platform to meet the operational requirements of the Indian Air Force and Indian Army.

In March, the Prime Minister Narendra Modi-led Cabinet Committee on Security (CCS) approved the procurement of 15 indigenously developed Limited Series Production (LSP) LCH at a cost of Rs 3,887 crore. The defence ministry had said 10 helicopters would be for the IAF and five for the Indian Army.