Sweden’s Coast Guard has reported the discovery of a fourth leak in the Nord Stream pipelines, as Denmark calls the leaks an “unprecedented attack”. 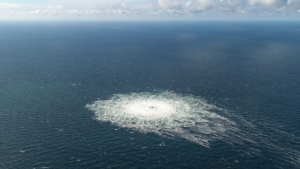 The Foreign Minister of Denmark, Jeppe Kofod, claimed that the damage inflicted on the Nord Stream pipelines was “intentional, not an accident” and that it should draw concern from the whole of Europe. “This is unprecedented. We haven’t seen that kind of attack or sabotage on critical European energy infrastructure,” Kofod told Sky News.

This comes after Sweden’s coast guard revealed that a fourth gas leak has been discovered on the damaged Nord Stream gas pipelines earlier this week. “Two of these four are in Sweden’s exclusive economic zone,” Jenny Larsson, a spokesperson of the Coast Guard of Sweden informed Svenska Dagbladet newspaper on Wednesday, as per The Guardian. She further stated that the other two breaches were in Denmark’s exclusive economic zone.

Moreover, the Coast Guard of Sweden informed that the latest leak was on Nord Stream 2 pipeline, in close proximity to a larger hole that was discovered on Nord Stream 1.

Citing the need to be aware of the critical infrastructures of a country, the Danish Foreign Minister stated “when it comes to energy and other infrastructure, so we all take, I think, the right precautionary steps.” Kofod further remarked that Denmark and the rest of Europe needed to end dependence on Russian energy, whether it’s gas, coal or oil, and revealed that the nation was “working very hard to obtain that objective in Europe.” “Denmark is doing its part, where we will focus a lot on investing massively in renewable energy, not least the offshore wind and other type of renewables, and also energy efficiency. So that is a course we will not change,” he added.

The Foreign Minister, however, stressed that it was important to conduct investigations into the events that unfolded leading to the gas leaks before apportioning blame.

Meanwhile, the European Union promised a “robust” response to any intentional disruption of its energy infrastructure after revealing that it suspected sabotage in the case of gas leaks in Nord Stream 1 and 2.

Kremlin spokesman Dmitry Peskov, in a press briefing on Wednesday, stated that it was crucial to investigate what exactly transpired at the gas pipelines in order to understand who benefits from it before drawing conclusions about the causes behind the leaks at Nord Stream 1 and 2.