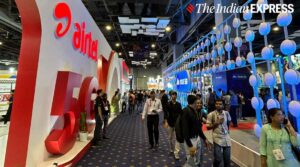 Dispelling confusion over the availability of 5G network on Apple devices, Airtel has confirmed that iPhone users will soon be able to use its 5G networks soon. “5G on iPhone is not working yet because Apple has to open it. They are promising to open it soon,” Airtel’s Chief Technology Officer Randeep Sekhon told indianexpress.com on the sidelines of the India Mobile Congress event in New Delhi.

“Apple is currently testing 5G in India; we have set up special networks for them to test,” he added. Sekhon made it clear that Airtel will not be sending an OTA (Over-the-air) update to make 5G work on your smartphone. Instead, the mobile handset manufacturer needs to push out the software update to enable 5G services on the device.

Right now, barring the iPhone, Airtel’s 5G services are active on 5G-ready smartphones from all major manufacturers. “You can buy an iPhone 14 today, but 5G will not work until Apple opens it,” he said.

“If you own a 5G-compatible iPhone and an Airtel SIM, it [5G] works. There is no need to change the SIM,” Sekhon clarified on whether users need to replace their existing SIM for 5G ones.

5G networks began rolling out commercially in India on Saturday when Prime Minister Narendra Modi launched 5G services on the opening day of the India Mobile Congress, a major event dedicated to telecom. Airtel’s 5G services already live in eight cities in India including Delhi, Mumbai, Varanasi, Bangalore, and others. Reliance Jio, the country’s top telecom operator, plans to kick start 5G services in the country around Diwali. Vodafone Idea, meanwhile, has not announced its rollout plan, but Kumar Mangalam Birla, during his speech at IMC, said it will be “very soon”.

5G promises to bring faster, more reliable connections for users. It will enable new types of experiences such as cloud gaming, thanks to faster speed and reduced latency. Access to 5G is expected to expand dramatically in India in 2023. The cost of the 5G plan is unclear, but experts say monthly 5G service is likely to cost more than 4G LTE service.

Apple iPhones older than iPhone 12, for example, will not support the next-generation wireless network technology. 5G is only supported on the iPhone 12 series, the iPhone 13 range, the iPhone 14 lineup and the affordable iPhone SE 3.