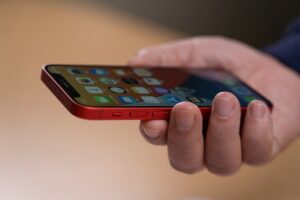 During a call with analysts, Apple said its business was slowing down in the current quarter, with a deceleration in sales of Macs and services.

When Apple released the 16th version of its iPhone in September, some tech reviewers described it as an incremental improvement over earlier models.

On Thursday, the world’s most valuable company said strong demand for iPhones helped it increase total revenue by 8% to $90.1 billion for the three months that ended in September, bringing an end to a fiscal year in which it posted sales gains every quarter. The company reported that profits rose nearly 1% to $20.7 billion.

The company said iPhone sales increased 10% to $42.6 billion in the quarter that ended in September, a major deceleration from the 47% increase it reported in the same period last year. The signature product accounts for about half of the company’s total revenue.

During a call with analysts, Apple said its business was slowing down in the current quarter, with a deceleration in sales of Macs and services. In noting the slowdown, it joined peers such as Google, Amazon and Microsoft in warning that their business are being hobbled as the economy weakens.

Although Apple’s earnings exceeded analysts’ forecasts, its shares initially fell in after-hours trading before turning around and rising more than 1% to $146.20. The shares had fallen 3% before the market closed.

Apple CEO Tim Cook said the company was facing inflationary pressure on wages and device components. Those factors, as well as a strengthening dollar, contributed to price increases on devices sold internationally.

Some Wall Street analysts have pointed to Apple as a safe haven for investors amid a slowing economy. In a year when smartphone sales are contracting, the iPhone has expanded and stolen market share. The company’s other businesses, including the App Store, Apple Watch and AirPods, are also growing, although they don’t come close to the scale of iPhone sales.

Other analysts are unconvinced. They see the economic slowdown buffeting the company’s two largest markets, the United States and China, and worry that Apple will be caught in the downturn. They predict that the iPhone’s business will dim, just as sales of Macs and iPads have cooled as students and workers return to classrooms and offices.

“Apple is human,” said Toni Sacconaghi, an analyst with Bernstein Research. “Not surprisingly, even this great consumer brand is not immune from the economic headwinds.”

Several years ago, Apple unveiled a new strategy to offset slowing iPhone sales by accelerating the sale of software and services across its devices. It issued its own credit card and rolled out a suite of new subscription offerings, including Apple TV+ and Apple News+.

The services business posted its lowest-ever quarterly sales increase this quarter, rising 5% to $19.19 billion. The company appears to be intent to avoid a similar slowdown in the current period. This week, it raised the monthly prices on Apple Music by $1 and Apple TV+ by $2. It also said it would begin taking a 30% cut of advertising payments to boost social media posts and start levying a 30% fee on trades of non-fungible tokens across iPhones and iPads.

“To do that now, in a challenging economy, it shows that their business is strong,” said Trip Miller, founder of Gullane Capital Partners, an investment firm based in Memphis, Tennessee.

Still, the biggest issue Apple faces is its supply chain. China produces more than 90% of the iPhones that it sells globally, as well as many of its iPads and Macs. The country’s strict coronavirus restrictions have led it to close factories to suppress outbreaks, costing Apple about $4 billion in lost iPad and Mac sales. Those troubles spread to an iPhone factory for the first time this week when Foxconn reported a COVID-19 outbreak at its Apple assembly plant in Zhengzhou, China.