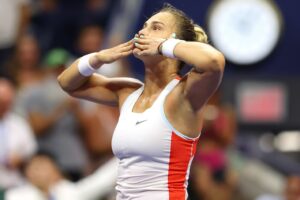 Aryna Sabalenka ended top-ranked Iga Swiatek’s 15-match winning streak against top-10 opponents, winning 6-2, 2-6, 6-1 for a spot in the championship of the WTA Finals.

The stunner on Sunday put Sabalenka in the final against Caroline Garcia, who beat Maria Sakkari 6-3, 6-2 and has a chance to be just the second Frenchwoman to win the title at the season-ending event. Swiatek, the French Open and U.S. Open champion and runaway leader with eight tour victories, cruised through three round-robin victories, losing just 13 games to give her the longest winning run against top-10 opponents since Steffi Graf won 17 straight in 1987.

Just like that, it was over when the 21-year-old from Poland lost the last five games against a player she had beaten in all four meetings this season. Sabalenka didn’t make it to the semifinals with the No. 1 ranking in the eight-player event last year. She was in as the seventh-ranked player, and showed how comfortable she was on the temporary indoor hard court at Dickies Arena. Nine of her 10 career victories have come on hard courts.

“I just want to make sure that every time she plays against me, she knows that she really has to work hard to get a win,” Sabalenka said. “Only because of this thinking, I was able to play at this amazing level tonight.” Swiatek fell behind one break in the final set with two wide forehands before another one put her down two breaks. Defending doubles champs Barbora Krejcikova and Katerina Siniakova also advanced to the title match with a 7-6(5), 6-2 semifinal victory over Lyudmyla Kichenok and Jelena Ostapenko.

Just 24 hours after beating Daria Kasatkina in a tense 80-minute third set to secure the last spot in the semifinals out of group play, Garcia needed just 74 minutes total for a career-best fourth victory over a top-five opponent this season. Garcia never trailed, dominating the fifth-ranked Sakkari in winners (21-8) and aces (6-0). Amelie Mauresmo (2005) is the only woman from France to win the WTA Finals.

“I don’t know,” Garcia said when asked where she found the energy to dominate after the quick turnaround. “Yesterday, I was a little bit tired, but it was nothing unusual after such a big match.” Garcia has advanced out of group play in both WTA Finals appearances. The 29-year-old lost in the semifinals in the eight-player event five years ago, which also was the most recent time a player older than Garcia reached the semis (Venus Williams).

“I guess I’m five years older, maybe five years wiser,” said the sixth-ranked Garcia, who was No. 74 about this time last year. “You try to learn from everything. I’ve got a good team behind me, supporting me when I was a little bit doubting myself.” Sakkari also was among the five players who have reached the semis their first two times since the round-robin format was reintroduced in 2003. She lost in the semis last year.

Garcia used a 120 mph ace to help erase a break chance for Sakkari and extend her lead to 4-0 in the second set. Garcia’s sixth and final ace — and tournament-leading 14th — answered a double fault that gave Sakkari another break point. Garcia closed out that game for a 5-1 lead on the way to a 3-0 career record against Sakkari. Sakkari had three straight-set victories in the tournament after coming in with just one win over a top-10 opponent this season.

The 27-year-old from Greece never recovered after dropping her first set of the week, finishing with 11 more unforced errors (19) than winners. “Not taking away anything from her, I played a very average match from my side,” said Sakkari, who didn’t qualify for the WTA Finals until the final event of the regular season. “I wasn’t sharp. I wasn’t energized.”