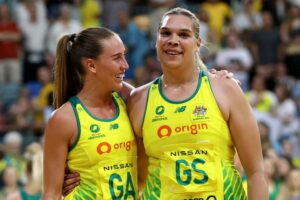 Donnell Wallam said it had been “one of the toughest weeks of her life” after scoring a last-minute winner as Australia beat England 55-54 in the first of their three-match series.

Wallam, 28, is the first Indigenous player to feature for the Diamonds in more than two decades.

But the build-up to her debut was overshadowed by mining company Hancock Prospecting pulling their A$15m (£8.4m) sponsorship deal with Netball Australia after she privately raised concerns about the company’s Indigenous record.

The squad’s only Aboriginal player ,Wallam is widely reported to have told team-mates she was uncomfortable wearing the company’s logo, while they then reportedly also refused to wear it in solidarity with her.

Wallam is said to be particularly concerned about racist comments made by Hancock Prospecting’s founder Lang Hancock in 1984.

In a TV interview, he suggested Aboriginal people should “breed themselves out”, adding: “I would dope the water up so that they were sterile… that would solve the problem.”

On Saturday, Hancock Prospecting said the sponsorship deal would no longer go ahead, despite reports that Wallam was willing to wear the logo after the pressure became “too much to bear”.

Its executive chairman Gina Rinehart – Australia’s richest citizen and one of the biggest private investors in Australian sport – is the daughter of Lang Hancock.

In pulling the deal, Hancock Prospecting and Rinehart expressed frustration that sport was being “used as the vehicle for social or political causes”.

They said in a statement: “There are more targeted and genuine ways to progress social or political causes without virtue signalling or for self-publicity.”

The company then defended itself by saying it helps provide training, employment and education opportunities in Aboriginal communities, as well as making significant royalty payments to traditional owners for mining their land.

Wallam started the match against England’s Roses on the bench in Newcastle, New South Wales but was given a huge ovation when she came on in the fourth quarter, becoming the third indigenous Australian to play for the Diamonds.

She scored with her very first touch, adding six more before netting the winner with seven seconds left on the clock.

She told Fox Sports: “I was kind of relieved to finally get my chance on court. It has been one of the toughest weeks of my life so to get out on the court was really special.

“It’s really special, I just hope I’m now a role model to the young girls and boys coming through for their turn.”

It is the first time since 2018 that the Roses have played in Australia after their planned 2021 tour was cancelled due to Covid-19 restrictions.

Eleanor Cardwell earned her 50th cap as Jess Thirlby’s side pushed the world champions throughout a tight encounter, holding a one-goal lead at half-time.

“We wanted to show we can compete and make sure our strategies are robust enough to compete with the best team in the world and I think we gave a fair account of that,” said Thirlby.

“It was great that we were in the lead at times, the Diamonds came back at us but we responded and we never let the game get away from us and I think that’s a big step forward.”

The second match of the series takes place in Sydney on Sunday (08:30 GMT).