According to the UK Central Bank, an increase in interest rates was seen on long-dated UK government bonds in the days after Kwarteng announced a mini-budget. 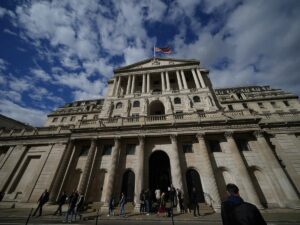 Pension funds managing vast sums on behalf of retirees across the UK came close to collapse, the Bank of England said. According to UK’s Central Bank, this development took place amid an “unprecedented” meltdown in UK government bond markets after Britain’s Chancellor of the Exchequer Kwasi Kwarteng announced a mini-budget, The Guardian reported. It underscored that the pension funds which had more than £1 trillion investment in them were under severe strain with a “large number” in danger of going bust when the bank of England decided to intervene in the financial market.

According to the UK Central Bank, an increase in interest rates was seen on long-dated UK government bonds after Kwasi Kwarteng announced a mini-budget. The announcement of the mini-budget led to “self-reinforcing” spirals in debt markets and affected the stability of the UK’s financial system. As per the news report, the funds managing money on behalf of pensioners across the UK “would have been left with negative net asset value” if the Bank of England had not announced its decision to buy up to £65 billion of government debt. In addition, they could not have been able to meet their cash demands. The UK Central Bank said that this development could have led to pension funds likely starting the “process of winding up” the next day.

Market movements witnessed after announcement of mini-budget: Bank of England

According to the Bank of England, the meltdown was at risk of crippling Britain’s financial system which could have resulted in “excessive and sudden tightening of financing conditions for the real economy,” as per the Guardian report. The UK Central Bank’s Deputy Governor for the financial system, Jon Cunliffe, in a letter written to the Commons Treasury committee said that the largest market movements came after the UK Chancellor of the Exchequer announced a mini-budget. Explaining the intervention of the Bank of England in the letter, Cunliffe said that the UK’s currency collapsed by around 4 per cent in comparison to the dollar and 2 per cent against the euro, while long-term bond yields rose 30 basis points amid “very poor” conditions for the number of buyers and sellers who were prepared to trade on that day.

On September 28, the Bank of England announced that it would purchase UK government bonds “on whatever scale is necessary.” The Bank of England said that it was “closely” watching the developments in financial markets concerning the repricing of the UK and global financial assets. It stated that the bank is willing to restore market functioning and bring down the risk to credit conditions for UK households and businesses. In the statement, the Bank of England announced that they will carry out temporary purchases of UK government debts from 28 September and auctions will take place until 14 October. It stressed that the decision has been aimed to restore orderly market conditions. According to UK’s central bank, the purchases will be “strictly time-limited” with the goal to tackle a “specific problem” in the government debt market.