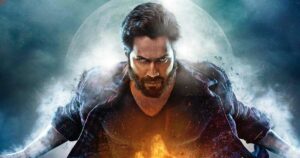 Bhediya trailer: Varun Dhawan transforms into an ‘icchhadhaari bhediya’ in Arunachal Pradesh, and creates mayhem. The film will be released in theatres on November 25 this year.

The trailer of the upcoming horror-comedy Bhediya, starring actors Varun Dhawan and Kriti Sanon, was released on Wednesday. In the nearly three-minute-long clip, Varun’s journey, as he transforms into a werewolf after being bitten by a mythical wolf, is shown. The trailer is also dotted with comic moments as Varun’s friends try to understand what he is going through.

The trailer shows a sneak peek of Varun turning into the werewolf and telling Kriti about the changes in his body. Varun’s character, Bhaskar, tries to find answers with his friends. In the clip, Varun is also seen getting angry at his friends as his inner werewolf gets the better of him. His friends discuss how Varun is transforming into an ‘ichchadhari bhediya (mythical werewolf)’.

In the clip, Varun explains how he turns into a werewolf and isn’t aware of how the changes every night. He compares his nails with ‘Rampuri chaaku (a certain type of knife)’ and teeth with Dracula. He also explains how he gets a tail and the other dogs call him uncle. As the trailer continues, Varun, Kriti Sanon and his friends try to find a cure for him. The video ends with the title song Jungle Jungle Baat Chali Hai from The Jungle Book playing in the background.

Apart from Varun and Kriti, the film also stars Deepak Dobriyal and Abhishek Banerjee. Helmed by Amar Kaushik, Bhediya is slated to hit the theatres on November 25. Produced by Dinesh Vijan, the film will release in cinemas pan-India in Hindi, Telugu and Tamil in 2D and 3D.

The film went on floors earlier in March in Arunachal Pradesh. Talking about the trailer, director Amar Kaushik said, “Our trailer gives a small taste of the enthralling adventure audiences are in for. Bhediya is crafted to be enjoyed in cinemas. It will fill you with a sense of awe and wonder, and tickle your funny bone with laughs galore. We are glad that it arrives in all its big screen glory soon”.

After Bhediya, Varun will be also seen in an upcoming social drama film Bawaal opposite Janhvi Kapoor. He was last seen in Jug Jugg Jeeyo. The film was released in June this year. The film also starred Kiara Advani, Neetu Kapoor, and Anil Kapoor.

Kriti will be also seen in the upcoming pan-India film Adipurush alongside Prabhas, Saif Ali Khan and Sunny Singh. She also has Ganpath: Part 1 opposite Tiger Shroff, which is slated to release on Christmas 2022. She will also be a part of Shehzada along with Kartik Aaryan, which is all set to hit the theatres on February 10, 2023.