Sumbul Touqeer talks about being the youngest contestant on Bigg Boss 16, getting fans’ love in abundance and her departure from Imlie. 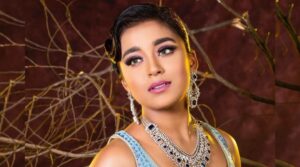 Sumbul Touqeer Khan, who rose to fame by playing the lead role in Imlie, is now locked inside the Bigg Boss 16 house. The youngest contestant this season, fans were impressed by how the actor manipulated her co-contestants to win last night’s task. In the latest promo, Sumbul is seen lamenting that people consider her as a kid. “Ab royega nahi, rulayega,” she shares.

Before entering the Salman Khan-hosted show, the actor had mentioned how people could take her for granted given her age. “But once they sit with me even for an hour, they will realise my maturity. I have gone through a lot and that has brought me wisdom. And if they still don’t understand, I guess they will just lose to a child,” she laughed to share with indianexpress.com.

Sumbul Touqeer Khan further shared how people have seen her real side in Ravivaar with Star Parivaar. Stating that there won’t be any shocker for her fans, the actor added, “I am a very honest person and thus people have already seen me as a person. The only new element would be about the stands I take in the house, but then that too is very situational. Many do ask if I would be image conscious but let me tell you that is completely in our hands. If I behave like an ill-mannered person, that will just show my upbringing. And it will also make me lose the fans that I have made over the years.”

She also shared how her fans are excited for this new journey, adding that even when they’ll vote for her, she knows it will be for her and not Imlie.

As she mentioned her TV show, we wondered what made her quit it given it was bringing her so much love. “I never wanted to leave, it was the makers and channel’s decision,” revealed Sumbul Touqueer Khan. She added, “They wanted to get new faces for the show and did not want to continue with us. We had been hearing about it but never expected it to happen. When it finally dawned upon us, we were shocked and upset. However, I must add that till the last scene, we gave it our all. Be it Fahman (Khan), other actors, or even the directors, everyone was on their toes throughout. I don’t think a lot of people would do that.”