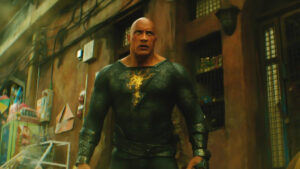 Black Adam movie review: Dwayne Johnson puts on the superhero suit finally but for a boring, bloated mess of a movie.

It was only a matter of time really. Dwayne The Rock Johnson was always going to enter the superhero arena eventually. Why would he not, as one of the only movie stars who actually looks like a superhero? If anything, it’s a wonder it took him so long to don the spandex and take flight.

The Rock plays antihero Black Adam in the latest from the bumpy DC cinematic universe. As the impressively lazy opening voiceover tells us, 5000 years ago there existed the vibrant, thriving kingdom of Kahndaq (somewhere in the Middle East). That is until an evil king decided to enslave Kahndaq’s people using his evil magic crown. Amidst years of oppression, a hero finally arose from the people who dared to take a stand against the king. An ancient order of wizards (the same ones that gave Shazam his powers) decided to grant this champion powerful abilities to help liberate and save his people. But after a battle with the evil king, the champion disappeared and the king’s magic crown was lost forever (I literally feel like I’m reading out a children’s bedtime story at this point).

Cut to the present day and Kahndaq once again lies in ruin with its people living under the hostile rule of Intergang – an organisation of foreign mercenaries (some sort of Iraq metaphor?) A group of brave freedom fighters (Sarah Shahi and Mohammed Amer as the ineffective comic in a film in desperate need of relief) attempt to take a stand against their merc invaders by setting out to find the lost magic crown, to keep it out of the hands of the bad guys, I think?While off tomb raiding, they manage to locate said crown and in the process, reawaken the famed champion – Black Adam (The Rock who seems so content looking the part that he does little else to act, perform or emote).

As the film shrieks at us literally every six minutes, Black Adam isn’t a hero. He isn’t a villain. He’s an uncontrollable violent force who has no issue taking the lives of his enemies. Think moody Superman on crack. I don’t think I’ve ever seen The Rock this dull and uninteresting to watch. We see not even an iota of the charisma from films like Jungle Cruise, Red Notice, and Jumanji, or the sheer formidable presence of Hobbs from the Fast And Furious franchise. It’s to the credit of director Jaume Collet-Serra that he’s managed to make an empty film that’s spectacularly devoid of any kind of directorial stamp (it’s what’s known as the ‘John Watts condition’). What’s worse, he’s also failed on the absolute bare basics of capitalising on The Rock’s daunting presence as a really angry, scary dude who could snap you like a twig.

There are a precious few moments early on where we first see Adam tear through soldiers, rip them in half, and zap them to hell, where we get some inkling of what could have been. An arena of fear. Soldiers on the run from an impossibly powerful being who’s eviscerating them in seconds. Think of the scary Kryptonians in Man Of Steel or the haunting presence and casual carnage of Anthony Starr’s Homelander in The Boys. Whereas the most that can be said about Black Adam, in both character and performance, is that he shows up. He’s certainly in this movie.

On the scene to contain Black Adam and eventually try to make him embrace his inner hero is The Justice Society of America, led by Carter Hall AKA Hawkman, a swagged-up Aldis Hodge as arguably the only watchable actor here and comes out of this bloated mess of a movie relatively unscathed. Hall is tasked with assembling a team to take down Adam, which he does from his massive Charles Xavier-style mansion. Also on the team is Dr. Fate: Pierce Brosnan doing his best with a wafer-thin character. With Fate, the makers clearly have zero interest in exploring a truly fascinating figure. Instead, he’s reduced to being an impressively useless hero who does next to nothing of value throughout the proceedings, aside from a lot of sitting and talking and pondering. If I’m ever falling off a building, for God’s sake don’t call him. It also doesn’t help that Brosnan looks truly ridiculous in the costume.

Rounding off the team are the two forgettable rookies – Atom Smasher which is Noah Centineo playing goofier Ant-Man, and Cyclone: Quintessa Swindell as a hero who can control the wind while glowing in every colour possible. A friend and fellow critic sitting next to me described Cyclone’s abilities as “interpretive dance” and I can’t stop thinking about how hilariously accurate that feels. For most of the movie, the JSA are remarkably useless and do far more harm than good. They fly into Kahndaq to contain Adam but essentially just end up tearing through the city and destroying every standing structure in sight. It reminded me of a stellar sequence from Season 3 of The Boys, where a team of super-powered buffoons is sent to the front lines of the Vietnam war where they only manage to end up killing all their allies and little else.

For what it’s worth, I liked that there was at least some attempt at imagination in staging the film’s action set pieces, the key word being ‘attempt’. The beginning Black Adam vs soldiers in slow motion sequence, the Mexican stand-off sequence, and the Black Adam tearing through posters of DC heroes in a child’s room sequence. They’re far from memorable, but any sort of innovation you find in this film, you cling onto for dear life.

What’s there left to say? We could discuss the bland music from Lorne Balfe. We could talk about one of the most pointless DC-VFX-supervillains ever seen on screen. We could get into how the entire film feels like it was shot on the same three sets and soundstages. Or the juvenile dialogue perhaps? Black adam is “written” by Rory Haines, Adam Sztykiel, and Sohrab Noshirvani. When I saw Sohrab’s name in the credits, I genuinely didn’t know whether to celebrate that a brown guy had made it beyond the VFX team list, or be dejected by the fact that he was partially responsible for this movie.

In this, the age of superhero storytelling, Black Adam represents the very worst of it. A generic, vague, bloated blur of VFX, with little sense of character, craft, or creativity. At one point in the film, a key character is put into “suspended animation” – a barely conscious state of being where you’re unaware of your surroundings and are kept just about functional. A fitting metaphor, I think, for the experience of sitting through Black Adam.