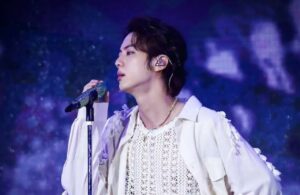 BTS’ Jin will play his solo single The Astronaut live for the first time at Coldplay’s Argentina concert on October 28. Check out the details here.

BTS member Jin will participate in British rock band Coldplay’s upcoming Music of the Spheres World Tour in Argentina on October 28. In a statement on Weverse on Thursday, BTS agency BigHit Music also revealed that Jin will sing his solo single The Astronaut. It also said that the song has been co-written by Jin and Coldplay.

Taking to Twitter, BTS’ official account shared a ‘new message’ that ‘arrived from Chris Martin for Kim Seokjin’. Their conversation started as they exchanged greetings. Chris said that he is ‘getting better every day’. He also told Jin, “If you get permission, would you like to come to Argentina next week and sing The Astronaut’ live with us? We have a live broadcast on October 28, and if you were there we could play the song for the first time. And thank you for inspiring the song. When we spoke about you having to leave for a while and missing the band and your fans, it was really powerful. I think the song found its way because of that conversation.”

Jin’s message read, “I wasn’t feeling well either when I had a show a few days ago. I guess this is something all superstars go through! Thank you so much for working so closely on this song with me, and listening to my opinions every step of the way. I feel super honoured to have worked with you, my superstar, my bro. And performing this song in Argentina sounds amazing! I will make it happen no matter what because you are my superstar.”

BigHit Music statement read, “We’d like to inform you about BTS Jin’s participation in Coldplay’s world tour. In the Argentina concert of Coldplay’s MUSIC of the SPHERES Tour, Jin will be performing The Astronaut with Coldplay.” The concert will be held on October 28, 2022 (ET) at 7 pm. It will be held in Estadio River Plate, Buenos Aires.

The statement also added, “This concert will not be live-streamed online. However, we will upload the performance video of The Astronaut after the concert to make sure ARMY all around the world can watch Jin and Coldplay’s performance.” It will be uploaded at 3 pm on October 29, 2022 (KST) on Bangtan TV.

“The Coldplay concert will be live-streamed and delayed-streamed in theaters not only in South Korea, but all around the world. The event will be a paid in-person event. The performance will be all the more momentous as Jin’s solo single The Astronaut is a co-written song of Jin and Coldplay. We look forward to your continued interest and enthusiastic support. Thank you,” concluded the statement.

Recently, Jin had announced about his solo debut during BTS’ performance at World Expo 2030 Busan concert. Several reports suggested that he will collaborate with Coldplay for his first single album. Reacting to speculations, Soompi quoted BigHit Music’s representative saying, “Jin will release his solo single at the end of October. The exact details of the date and time, collaboration, and more will be revealed later. We ask for your understanding.”

This album comes ahead of Jin’s beginning his process to enlist in the compulsory military service in South Korea around October-end. He will be followed by BTS members–RM, Suga, J-Hope, Jimin, V and Jungkook. The group will reconvene ‘around 2025’.