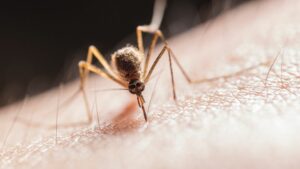 A cancer medication undergoing clinical testing has demonstrated the potential to protect from, cure, and prevent transmission of malaria.

A cancer treatment presently in clinical testing has the potential to guard against, cure, and prevent malaria transmission. The groundbreaking discovery by a multinational team led by Penn State researchers gives new hope against a disease that kills over 500,000 people each year, disproportionately impacting children under the age of five, pregnant women, and HIV patients.

The research team, led by experts from the University of Cape Town (UCT), published their findings in the journal Science Translational Medicine.

“Disruptions to malaria vaccinations, treatment, and care during the COVID-19 pandemic, combined with increasing reports of resistance to first-line artemisinin-based combination therapies have led to an increase of malaria cases and deaths worldwide,” said Manuel Llinas, distinguished professor of biochemistry and molecular biology and of chemistry at Penn State. “The identification of new ways to treat the disease is crucial for malaria control. Ideal treatments would operate differently than current front-line drugs to circumvent current drug resistance and act on multiple targets or stages of the parasite’s life cycle in order to slow future resistance.”

The researchers wanted to see if sapanisertib, a medicine now in clinical trials for the treatment of tumors such as breast cancer, endometrial cancer, glioblastoma, renal cell carcinoma, and thyroid cancer, could be used to treat malaria.

Sapanisertib has the ability to guard against, cure, and prevent malaria transmission by killing the malaria parasite at various phases of its life cycle inside its human host. This includes when the parasite is in the host’s liver, where it first develops and multiplies; when it is in the host’s red blood cells, where clinical signs are detected; and when it splits sexually within the host’s red blood cells to generate the parasite’s transmissible forms. Because the transmissible form is normally taken up by the female Anopheles mosquito during a blood meal and carried on to infect another person during subsequent blood meals, eliminating the parasite should also prevent subsequent infections.

The researchers also discovered that sapanisertib inhibits various proteins called kinases in the malaria parasite, which is how the medicine kills the human malaria parasite.

Sapanisertib’s multistage activity and antimalarial efficacy, combined with potent inhibition of multiple protein targets — including at least two that have previously been shown to be vulnerable targets for chemotherapeutic intervention — will serve as the foundation for future research into the potential of repurposing sapanisertib to treat malaria.

The research team used a technique known as drug repurposing, which tries to uncover new uses for an existing drug approved by a regulatory agency in one illness area but not in another. This strategy is used to avoid the difficulties of discovering and developing a new medicine from scratch, which is a time-consuming and expensive procedure with minimal returns in terms of the number of drugs that eventually make it to market.

“The problem is amplified in neglected and tropical diseases such as malaria where existing resources are strained and the financial returns low,” said Kelly Chibale, founder and director of the UCT Drug Discovery and Development Centre, Neville Isdell Chair in African-centric Drug Discovery and Development at UCT, and leader of the research team. “The drug repurposing approach of investigating existing drugs as potential therapies for other diseases shortens the process as in most cases the candidates, in this case, sapanisertib, will have been through several stages of clinical development and will have well-known exposure and safety profiles in humans.”

While novel uses for approved treatments have occasionally been discovered by chance in the drug repurposing approach, strategies exist to identify drugs that can be used for other diseases rationally. In this investigation, the researchers used medicines that act on human protein targets and may be active on similar protein targets in the malaria parasite.

See also  Staying Warm At Home Without Overspending On Heating

Tarrick Qahash, an undergraduate turned technician in Penn State’s Llinas lab, employed mass spectrometry-based metabolomics to determine the parasite’s reaction to a number of antimalarial drugs as part of the Malaria Drug Accelerator project supported by the Bill and Melinda Gates Foundation.

“In cancer, sapanisertib inhibits a protein kinase called mTOR that regulates a variety of cellular processes, including immune response and autophagy. However, until this study, it was unclear how it would affect the malaria parasite,” said Llinas. “We used a process called metabolic fingerprint profiling and found that the parasite’s response to sapanisertib resembled inhibition by other protein kinase inhibitors we had investigated. Through its effects on the parasite’s metabolism of hemoglobin–a protein that carries oxygen through the blood–we determined that sapanisertib primarily inhibits the kinase called PfPI4Kb, but we also found that it can target a kinase called PKG.”

Because of their relevance in cellular function, kinases have been widely researched as therapeutic targets in numerous disorders. This makes them appealing for use in other disorders, such as malaria. Kinase targets that are required for various phases of the malaria parasite life cycle have previously been discovered.

This research opens up new possibilities for the rational creation of malaria medications that target two or more protein targets in the malaria parasite. This could also benefit patients in a clinical setting since it makes it more difficult for the parasite to build resistance to a treatment that kills through numerous routes.

Recognizing the possible safety issues associated with utilizing a cancer medicine to treat malaria, the study team is now working to understand the drivers of sapanisertib efficacy, dose needs, and therapeutic window for malaria. The goal is to assess how the estimated human dose of sapanisertib for malaria differs from the maximum tolerated dose used to treat cancer.

“This work highlights the importance of local and international research partnerships to solve critical human challenges based on mutual interest and responsibility,” said Chibale. “It demonstrates how advances in science and medicine can be made when industry and academic institutions share knowledge and expertise.”