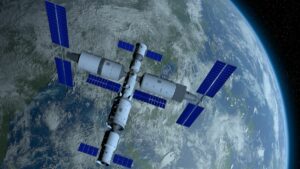 China launched the third and final module of its space station on Monday, a significant step as the country expands its extensive scientific research outside the Earth’s atmosphere.

State television broadcast the launch live, showing a rocket roaring into a grey layer of clouds above Hainan Island in southernmost China, with the module aboard. Deng Hongqin, the director of the launch command centre, announced after the module was in orbit.

Nearly 59 feet long and weighing 23 tons, the module, called Mengtian, was expected to dock with the Tiangong space station. The module carries a wide range of experimental equipment.

Yang Hong, the space station’s chief designer, said in April that the Mengtian module would be equipped with a cargo airlock. Outside the airlock will be a platform on which experiments can be mounted.

Dubai: Iran will hold public trials of about 1,000 people charged in Tehran over the unrest, a semi-official news agency said on Monday, as authorities step up efforts to crush more than six weeks of protests ignited by Mahsa Amini’s death in custody.

One of the boldest challenges to Iran’s clerical leaders since the 1979 revolution, the protests have continued despite increasingly severe warnings: the  Revolutionary Guards on Saturday bluntly told protesters to stay off the streets.

Iranian leaders have described the protests as a plot by enemies of the Islamic Republic. Protesters from all walks of life have taken part, with students and women playing a prominent role.
See also  China’s Largest Policy Bank To Boost Infrastructure Loans To Local Govts