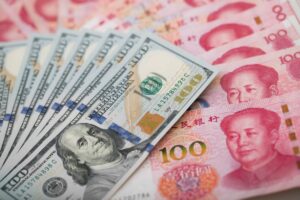 China’s yuan has hit fresh record lows against the surging US dollar.

The internationally-traded yuan fell to its lowest level since data first became available in 2011.

It comes as the dollar continues to rise in value against other major currencies, after the US central bank increased interest rates again earlier this month.

Many investors see the dollar as a safe place to put their money in times of trouble.

That has helped to drive up its value against other currencies, including the British pound – which hit an all-time low against the dollar on Monday.

Also on Wednesday, the dollar reached a fresh 20-year high against a closely-watched group of leading global currencies.

The yuan’s slide is yet another example of a currency weakening as a result of the strong dollar.

It is also about the very different paths China and the United States are taking in response to economic issues at home.

The People’s Bank of China (PBOC) has been easing interest rates to revive growth in an economy ravaged by Covid lockdowns, while the US Federal Reserve is moving aggressively in the opposite direction as it tries to control inflation.

Such a divergence is not wholly problematic, Joseph Capurso, head of international and sustainable economics at the Commonwealth Bank of Australia told the BBC.

The fall in the currency’s value can actually be helpful for exporters within China, he said, because it would make their goods cheaper and so could increase demand.

That said, exports only make up 20% of the Chinese economy these days, so a weak yuan will not turn around fundamental weakness domestically largely caused by Beijing’s zero-Covid strategy and a property crisis, said Mr Capurso.

A weaker currency can also lead to investors pulling their money out of the country and uncertainty in financial markets – something Chinese officials will want to avoid with the Communist Party Congress coming up next month.

The yuan’s fall has caused weakness in other currencies of developed economies in the region, including the Australian and Singapore dollar as well as the South Korean won.

Last week, the Bank of Japan intervened to support the yen for the first time since 1998, after the currency weakened against the dollar.

Asia’s emerging markets are vulnerable too – as they sell raw materials and components to China’s factories and so have increasingly become dependent on the yuan.

Washington has in the past accused China of intentionally devaluing its currency to keep exports cheap and imports from the US expensive.

While the strong dollar has rattled world markets, it is unlikely to deter the Fed from continuing to raise rates.

“The strong dollar is working for the US market,” Dimitri Zabelin at the London School of Economics’ foreign policy think-tank said.

“It will be a consideration but it will not weigh as heavy as domestic concern about inflation.”

China’s central bank has been trying to slow the yuan’s slide by making it more expensive to bet against the currency. The PBOC also cut how much foreign currency banks have to hold.