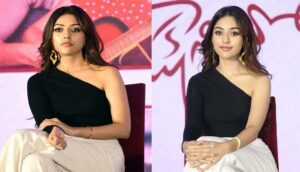 Sharing a video from an event for Sunny Leone’s new Tamil film Oh My Ghost in Chennai, Chinmayi Sripada criticised actor Sathish for his comment on ‘dressing according to culture’. Sunny wore a saree, while her co-star Dharsha Gupta wore a blue dress at the event.

Chinmayi Sripada criticised actor Sathish for the statement he made about Dharsha Gupta’s dress at a recent event. Calling his comment, where he compared her outfit with Sunny Leone, who was also present on stage, ‘not funny’, Chinmayi asked when such behaviour of men would stop.

In the video that Chinmayi Sridapa shared from the audio launch of Dharsha and Sunny Leone’s new Tamil film Oh My Ghost, Sathish said, “Sunny Leone has come from Mumbai for the event and look at the way she’s dressed (in saree). But look at the other woman (Dharsha Gupta), who is from Coimbatore, and look what she’s wearing.” While Sunny wore a pink blouse with a green saree, Dharsha was seen in a blue blouse with matching skirt for the event in Chennai.

NDTV reported that Sathish later clarified at the event that he made the statement on a lighter note, and that he was only appreciating Sunny Leone for adapting to south Indian culture and turning up in a saree at the event in Chennai. However, his comment was not appreciated by Chinmayi.

Questioning Sathish for passing a judgment on Dharsha’s outfit at a public event, Chinmayi tweeted on Wednesday, “I mean – to actually point at a woman and ask for mass heckling of a crowd by a man on a woman, who doesn’t dress according to culture… When will this behaviour from men stop? It’s not funny.” Sathish has not yet reacted to Chinmayi tweet or the video of him talking about Sunny and Dharsha’s outfit.

Many reacted to the singer’s tweet. One wrote, “It’s sad! Totally uncalled for just like his boring, double-meaning, non-existent sense of humour. Disgusting!” Another one agreed with Chinmayi, and tweeted, “If a Western person can freely wear Indian traditional wear, why is it that an Indian can’t? Ever seen pointing out Western clothing on Indian men?” Another person criticised Sathish, and tweeted, “I always find Sathish, who is totally non-talented as a comedian, makes these creepy comments about women. He (is) cringe to the max.”

Oh My Ghost is an upcoming Tamil movie that stars Sunny Leone, Dharsha Gupta, Yogi Babu, Ramesh Tilak, Sathish and GP Muthu in key roles. The film’s audio launch took place recently in Chennai and was attended by the cast. Sunny, who especially travelled for the launch from Mumbai, was one of the main highlights of the event. Fans shared videos and photos on social media of the actor from the event.