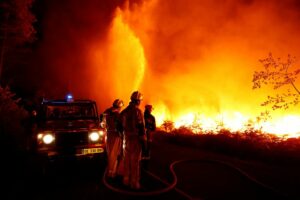 Maldives Fire: The Indian government has expressed grief over the incident and said it was in close contact with authorities.

Nine Indians were among 10 people killed Thursday in a fire in Maldives capital Malé, news agency AFP said citing the island nation’s fire service. 10 bodies were recovered from the upper floor of a building gutted in a blaze that began in a ground-floor vehicle repair garage.

An official told AFP ‘we found 10 bodies’, adding it took about four hours to put out the fire. Another said the tenth dead person was a Bangladesh national.

A three-second video shared by Save Maldives, a citizen-led environmental campaign, shows a fire truck in front a narrow alley between two residential buildings. Fire and smoke can be seen coming out of the building on the right.

“The dangerous fire in the city is a very sad incident. Many people lost their lives and a large number were injured. The incident is being investigated. Condolences to the families of the victims…” he wrote in the Divehi language.

Maldivian political parties have criticised conditions for foreign workers. They are thought to make up about half of Male’s 250,000-strong population and are mostly from Bangladesh, India, Nepal, Pakistan and Sri Lanka, according to AFP.

The Indian High Commission in the Maldives said it was ‘deeply saddened’.

“We are deeply saddened by the tragic fire incident in Malé which has caused loss of lives, including reportedly of Indian nationals. We are in close contact with the Maldivian authorities. For any assistance, HCI can be reached on following numbers: +9607361452 ; +9607790701,” the tweet read.