The decline in India’s foreign exchange reserves is largely due to the valuation changes arising from an appreciating US dollar, FM Nirmala Sitharaman said 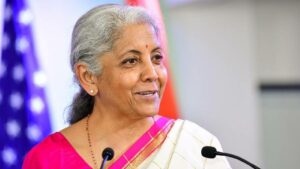 The decline in India’s foreign exchange reserves is largely due to the valuation changes arising from an appreciating US dollar, Union Finance Minister Nirmala Sitharaman said.

“India’s foreign exchange reserves at USD 537.5 billion as on September 23, 2022, compare favourably with most peer economies. Two-thirds of the decline in reserves is due to valuation changes arising from an appreciating US dollar and higher US bond yields,” Sitharaman said.

Indeed, there has been an accretion of USD 4.6 billion to the forex reserves in Q1:2022-23 on a balance of payments (BoP) basis. Other external indicators like net international investment position and short-term debt also indicate lower vulnerability, she said.

In fact, India’s external debt to GDP ratio is the lowest among major emerging market economies (EMEs), she added.

India’s forex reserves dropped by USD 4.854 billion to USD 532.664 billion as on September 30, according to the Reserve Bank of India (RBI).

The drop in the reserves for the week that ended on September 30 was on account of a dip in the Foreign Currency Assets (FCAs), a major component of the overall reserves, the Weekly Statistical Supplement released by the RBI stated.

According to Sitharaman, elevated imported inflation pressures remain an upside risk for the future trajectory of inflation, amplified by the continuing appreciation of the US dollar.

Indeed, inflation has ruled at or above the upper tolerance limit of 6 per cent since January 2022, she said.

In this context, Sitharaman said, calibrated withdrawal of monetary accommodation has continued to restrain broadening of price pressures, anchoring of inflation expectations and containing the second-round effects. India is better placed than many other advanced or emerging market economies, she said.

In this tumultuous global environment, India’s external financing position remains comfortable despite the widening of the current account deficit (CAD) to 2.8 per cent and the trade deficit to 8.1 per cent in Q1:2022-23, the minister said.

The higher trade deficit is expected to be offset by growing exports of services and increasing remittances. Overall, CAD is projected to be within 3 per cent of the GDP. With portfolio flows stabilising and foreign direct investment (FDI) remaining strong, this order of deficit is financeable, she said.

Turnaround of the corporate sector as also of the banking sector provides a buffer for absorbing risks in the economy. In the pre-pandemic phase, these sectors were suffering from the twin balance sheet problem. Restitution of their balance sheets has been a priority, she added.

Sitharaman said the soft interest rates regime during the COVID-19 years helped corporates restructure their debt and reduce interest costs. Their debt-equity ratios have since fallen to 0.5. The reduction of corporate tax rate in the pre-COVID-19 phase also helped the corporates absorb the pandemic shock.

Similarly, the banking sector has posted six-year lows on non-performing assets (NPAs) and slippage ratios, while capital to risk-weighted assets ratio (CRAR) and provision coverage ratio (PCR) have moved up, she said.

India also sees strong credit growth at 15 per cent in September 2022. The total resource flow to the corporate sector so far is five times that of last year’s mobilisation, mainly by way of bank credit, CPs and FDI, she said.