Typically, a flap surgery involves lifting tissue from a donor site and placing it on the recipient site with an intact blood supply. It was considered the gold standard for the reconstruction of soft tissue defects of the lower limb during its heydays. 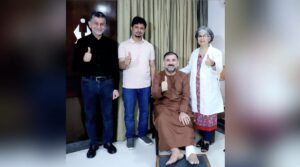 Doctors at Fortis Hospital Vasant Kunj successfully treated a 40-year-old road accident victim from Iraq with cross-leg flap surgery – an over a century old surgical technique – as the newer and more sophisticated ones were not feasible due to the patient’s precarious condition.

The patient, who had undergone three unsuccessful surgeries in Iraq over eight months, was admitted with acute dislocation of the left knee joint and a severely infected, pus-oozing leg. A team of doctors led by Dr Dhananjay Gupta, Director, Orthopaedics & Joint Replacement Surgery and Dr Rashmi Taneja, Director, Plastic & Reconstructive Surgery, thoroughly evaluated the patient. Investigations revealed that the patient’s affected leg had no intact blood vessel due to multiple injuries, which is necessary for reconstructive surgeries currently in vogue. The doctors then decided to perform the cross-leg flap surgery, a technique first described in medical literature in 1854.

What is cross-leg flap surgery?

Typically, a flap surgery involves lifting tissue from a donor site and placing it on the recipient site with an intact blood supply. It was considered the gold standard for the reconstruction of soft tissue defects of the lower limb during its heydays. However, the technique fell into disuse with the advent of the highly sophisticated microvascular techniques, which enable doctors to join or repair damaged blood vessels or nerves.

Sharing more details, Dr Gupta said, “After much deliberation, we decided to adopt a complex, multi-step approach. Though the treatment spanned over five weeks, the outcome is satisfactory. At present, the patient’s leg is well covered with soft tissue and there is no evidence of infection. The patient has been asked to start walking and he is currently undergoing physio rehabilitation. We hope that once the fracture heals over a period of three months, he will be able to take his full weight on that leg. We have also planned for additional procedures in the future, which may be required.”

Dr Taneja said, “This case was challenging because the patient had severe infection and poor bone quality. He was hypertensive and diabetic too. The patient’s two legs had to overlap each other, and he had to be kept in that position for three weeks. So, placing it in a manner where there’s no pressure between the two feet and making sure that there is no bending of the flap while it is taking up the new circulation was challenging and required planning and of course cooperation of the patient. We initially thought of doing a microvascular free flap reconstruction, which involves taking muscle and skin along with the blood vessels from either the back or the abdomen but had to abandon the idea as there was no intact blood vessel in the patient’s leg.”

Why is it still considered a safe bet?

According to the US-based National Library of Medicine, “Cross-leg flaps remain a useful and highly reliable tool for the reconstruction of difficult wounds of the lower limb. It offers the possibility of salvaging limbs that are otherwise non-reconstructable. Cross-extremity flaps function as a nutrient flap for the distal limb even though the pedicle has been divided. It is a backup procedure in an urgent situation and supplies a large quantity of skin. Advantages of cross-leg flap include ease of dissection, versatility, shorter operating time, minimal donor site morbidity, and replacement of like tissue with little or no need for secondary revision. With its simplicity, reliability, absence of functional deficit, and good-quality coverage with only moderate aesthetic disadvantage, cross-leg flap finds a definite place in reconstructive trauma surgery. Therefore, we recommend its use for injuries unsuitable for local tissue transfer, when real microvascular expertise is not available or operating room time is restricted.”

See also  Staying Warm At Home Without Overspending On Heating