Werewolf by Night star Gael Garcia Bernal believes his character Jack Russell can return to the MCU and would want him to appear with Benedict Cumberbatch’s Doctor Strange. 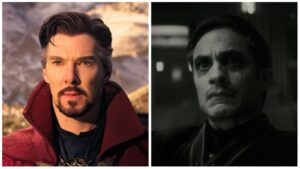 Werewolf by Night is the most unusual Marvel title. The TV special is a black-and-white horror show based on the werewolf myth and centred on a relatively less known Marvel antihero. Gael Garcia Bernal, who plays the show’s titular monster, speaks exclusively to Hindustan Times about drawing inspiration from classic Hollywood horror films and his character’s future in the Marvel Cinematic Universe.

Werewolf by Night is an homage to classic monster films like Wolfman and TV shows such as The Twilight Zone, right down to the monochrome colour tone. Gael admits he went back to some of these classics for inspiration. “I had to revisit all these films. Not all of them because there wasn’t enough time since there have been so many great films across the world with this archetypal figure of half-beast, half-human persona. The ones I liked the most were the ones that were a bit more self critical, kind of more cynical and farcical in a way of the werewolf. Such as An American Werewolf in London was very funny and interesting because it’s scary but at the same time it’s fun. I like that approach. Let’s leave the truly strong pathological things for the vampires,” he says.

Another thing that separates Werewolf by Night from other Marvel shows and films is its reliance on practical effects over visual effects and CGI. The film does not make use of green screen at all. Ask Gael what it was like to be in a monster film without all that, and he says with a smile, “It’s interesting because practical effects and camera effects are fantastic. I am one of the very few actors, I think, that have never worked with a green screen. I have never done something like that. I feel very happy to be able to do it this way. When I think about acting against a dot and crosses (the references used in green screen for actors), I don’t know how that would be. Sometimes the results are great but it’s complicated.”

The special’s director Michael Giacchino has said that the plot exists in the larger Marvel Cinematic Universe, even if it is a self-contained story without any crossovers or cameos. This does leave the door open for Werewolf by Night aka Jack Russell to appear in future MCU projects. Gael is clueless though. “I wouldn’t be able to spoil anything because I have no idea. I don’t know where this can lead. I know there’s many chances of him appearing with the characters that already exist. He is a character that has lived 300-400 years so who knows,” he says with a laugh. The actor has some thoughts about who he wants Jack to appear with though. “I think Doctor Strange is a really good one because they would have a lot to talk about,” he says.

Werewolf by Night also stars Laura Donnelly and Harriet Sansom Harris. The special began streaming on Disney+ Hotstar from Friday, October 7. It is part of Phase Four of the MCU.