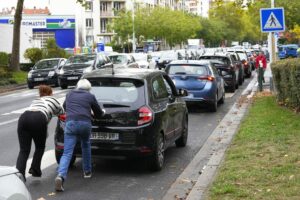 France on Monday braced for nationwide transport strike actions as the government and unions remained in deadlock over stoppages at oil depots that have sparked fuel shortages.

Leading unions have called for strikes Tuesday in their biggest challenge yet to President Emmanuel Macron since he won a new presidential term in May.

It will come after workers at several refineries and depots operated by energy giant TotalEnergies voted to extend their strike action, defying the government which has begun to force staff back on the job.

Motorists scrambled to fill tanks as the fuel strike, which has lasted for nearly three weeks, crippled supplies at just over 30 percent of France’s service stations.

The government, increasingly impatient with striking workers, said it was forcing key staff back to work.

“The time for negotiation is over,” Finance Minister Bruno Le Maire told the BFMTV broadcaster Monday.

The government said it would begin to requisition workers at the Feyzin depot in southeastern France from 2:00 pm (1200 GMT) on Monday, having already employed the same strategy at the Mardyck depot in the north of the country.

Three out of seven of the country’s oil refineries and five major fuel depots (out of around 200) are affected, the government said.

Strike action at Esso-ExxonMobil ended at the end of last week at the company’s two French refineries, after a pay deal between management and moderate unions which represent a majority of workers.

A return to normal supply conditions at petrol stations will take at least two weeks after strikes end, the government has warned.

Unions in other industries and the public sector have also announced action to protest against the twin impact of soaring energy prices and overall inflation on the cost of living.

Leftist unions CGT and FO have called for a nationwide strike Tuesday for higher salaries, and against government requisitions of oil installations, threatening to cripple public transport in particular.

Suburban services in the Paris region as well as bus services will also be impacted, operator RATP said, but the inner-Paris metro system should be mostly unaffected.

Beyond transport workers, unions hope to bring out staff in sectors such as the food industry and healthcare, CGT boss Philippe Martinez told France Inter radio.

Their action will kick off what is likely to be a tense autumn and winter as Macron also seeks to implement his flagship domestic policy of raising the French retirement age.

But the economic squeeze partly caused by Russia’s invasion of Ukraine, along with the failure of Macron’s party to secure an overall majority in June legislative polls, only adds to the magnitude of the task.

On Sunday tens of thousands of protesters marched in Paris to express their frustration at the rising cost of living.

The demonstration was called by the left-wing political opposition and led by the head of the France Unbowed (LFI) party, Jean-Luc Melenchon.

Security forces fired teargas and launched baton charges after they were pelted with objects, while on the fringes of the march, masked men dressed in black ransacked a bank.

Some protesters wore yellow fluorescent vests, the symbol of the often violent anti-government protests in 2018 that shook the pro-business government of Macron.

“We’re going to have a week the likes of which we don’t see very often,” Melenchon told the crowd.