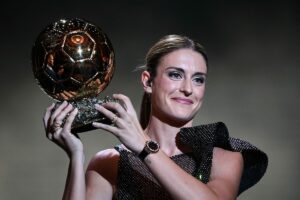 When Alexia Putellas was 16, Barcelona’s youth academy scouts spotted her. But the moment of joy soon turned into a heartbreak, as after one year she was discarded by the club and joined Espanyol

Growing up in Mollet del Vallés, just a 30-minute drive from Camp Nou, Alexia Putellas has never looked beyond Barcelona. Her favourite club as well as the only club she ever wanted to play football for. She not only realised her ambition but also became one of their finest-ever players of what is widely considered as the finest Barcelona Femeni generation, but after taking a circuitous route. From a Barcelona reject to Barcelona legend.

Like most families in her locality, she wedded to the club from her childhood. As a child, she would accompany her late father to Camp Nou and return home marvelled by the game’s beauty. Or at a local bar when they could not go to the stadium. She penned the memories in a touching piece in Players’ Tribune. “As a kid I would go with my parents, aunts, uncles and grandparents — all on the bus with the Mollet penya. In those days, I wanted to sit as close as possible to the players. I was always insisting that we move a little closer, even if the view was actually worse. I just wanted to be part of the action!” she writes.

“I remember being super nervous even though I barely understood what was going on. I just knew that this mattered,” she adds.

Her father enrolled her at a local club. Her playing career, she writes, started with a lie: “ My family took me to Sabadell, where a family friend was already in the team, but the minimum age was eight and I was only seven, so they had to “cheat” a little to get me in. I was playing with girls who were like 11 or 12 and I would come home complaining to my parents that I couldn’t kick the ball as hard as them, but I loved it anyway.

When she was 16, Barcelona’s youth academy scouts spotted her at a local football game and picked her. She was excited like never before, but the moment of joy soon turned into a heartbreak, as after one year, she was snubbed. For the first time in her life, she cried. But later, the rejection only emboldened her. “I was determined to achieve my goal of playing for Barcelona, whatever it would take,” she told Spanish daily MARCA.

She joined neighbours Espanyol, like most Barcelona rejects would, did not make much of an impact and subsequently moved to Levante, where her career took off. In her only season with the club, she scored 15 times in 34 games, healthy returns for someone who essentially played a left-winger. Off the field, though, she was draped in mourning, as she lost her father, who she paid moving tribute in her Balon d’Or speech last year. “I do everything because of you. I hope you’re proud of your daughter, wherever you are, this is for you, dad. He gave me my start in football, he would take me to practices every day, for that reason, I would love it if he was still around.”

But at the end of the season, Barcelona came knocking back on her doors. The dream was fulfilled, but in a sense the dream had just begun to take off. A major transformation in role happened. From a nippy left-sided winger she shifted to a deep-lying playmaker. The move would help her harness her creativity better as well as let her dictate the game. She jokingly claims to perform the dual roles of Xavi and Sergio Bus-quests, the playmaker-defensive shield roles. She would thread through the tightest of spaces to produce magical passes, would unleash thunderbolts from distance and then tigerishly win the balls back.

She had both Xavi and Busquets praising her. Xavi posted a picture of a young Putellas – who has been a lifelong Barça fan – and himself, captioned: “Here I am with the best player in the world! Busquets says he never turns off the television whenever she is playing and often watches from the stands when she is playing.

The 28-year-old was to become the leading light of a team that is called the finest of the generation. And a decade on, she has lived a full footballing life, from helping a team build from the scratch, enduring heartbreaks like losing the 2019 Champions final to Lyon, then playing the 2021 final against Chelsea through injury and pain, winning the treble, league titles and every silverware in club football, and then being recognised as the best player on the planet twice. And she says emotionally: “When I’m playing for this club, I truly feel like I am representing my family, my history, my home.” From a Barcelona reject to a Barcelona legend, her destiny finally seems fulfilled.