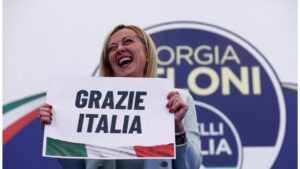 Far-right leader Giorgia Meloni has claimed victory in Italy’s election, and is on course to become the country’s first female prime minister.

That will alarm much of Europe as Italy is the EU’s third-biggest economy.

However, speaking after the vote, Ms Meloni said her Brothers of Italy party would “govern for everyone” and would not betray people’s trust.

“Italians have sent a clear message in favour of a right-wing government led by Brothers of Italy,” she told reporters in Rome, holding up a sign saying “Thank you Italy”.

She is predicted to win up to 26% of the vote, based on provisional results, ahead of her closest rival Enrico Letta from the centre left.

Ms Meloni’s right-wing alliance – which also includes Matteo Salvini’s far-right League and former PM Silvio Berlusconi’s centre-right Forza Italia – now looks to have control of both the Senate and the Chamber of Deputies, with around 44% of the vote.

Her own party’s dramatic success in the vote disguised the fact that her allies performed poorly, with Mr Salvini’s party slipping below 9%, and Forza Italia even lower. Four years ago, Brothers of Italy won little more than 4% of the vote but this time benefited from staying out of the national unity government that collapsed in July.

The decision on who becomes Italy’s next leader is up to the president, Sergio Mattarella, and that will take time.

Although Giorgia Meloni has worked hard to soften her image, emphasising her support for Ukraine and diluting anti-EU rhetoric, she leads a party rooted in a post-war movement that rose out of dictator Benito Mussolini’s fascists.

Earlier this year she outlined her priorities in a raucous speech to Spain’s far-right Vox party: “Yes to the natural family, no to the LGBT lobby, yes to sexual identity, no to gender ideology… no to Islamist violence, yes to secure borders, no to mass migration… no to big international finance… no to the bureaucrats of Brussels!”

The centre-left alliance was a long way behind the right with 26% of the vote and Democratic Party figure Debora Serracchiani said it was a sad evening for Italy. The right “has the majority in parliament, but not in the country”, she insisted.

The left failed to form a viable challenge with other parties after Italy’s 18-month unity government fell apart, and officials were downbeat even before the vote. The Five Star Movement under Giuseppe Conte won a convincing third place – but does not see eye to eye with Enrico Letta even though they have several policies in common on immigration and raising the minimum wage.

Turnout fell to a record low of 63.91% – nine points down on 2018. Voting levels were especially poor in southern regions including Sicily.

Italy is a founding father of the European Union and a member of Nato, and Ms Meloni’s rhetoric on the EU places her close to Hungary’s nationalist leader Viktor Orban.

Her allies have both had close ties with Russia. Mr Berlusconi, 85, claimed last week that Vladimir Putin was pushed into invading Ukraine while Mr Salvini has called into question Western sanctions on Moscow.

Ms Meloni wants to revisit Italian reforms agreed with the EU in return for almost €200bn (£178bn) in post-Covid recovery grants and loans, arguing that the energy crisis has changed the situation. 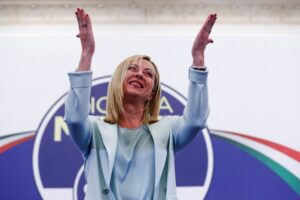