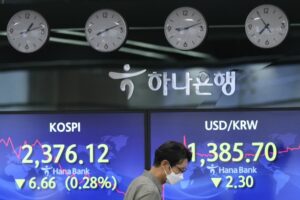 Global stocks edged higher in volatile trade on Monday, even though Beijing denied it would consider easing its zero COVID-19 policy, which stemmed safe-haven flows into the dollar ahead of potentially pivotal consumer inflation data this week.

Risk assets had rallied on Friday amid speculation China was preparing to relax its pandemic restrictions, but over the weekend health officials reiterated their commitment to the “dynamic-clearing” approach to COVID cases as soon as they emerge.

“We can question whether the China story has any veracity, but the market is quite happy to give it credence for the moment, despite the big denials,” CIBC Capital Markets head of G10 currency strategy Jeremy Stretch said.

By mid-morning in Europe, an overnight rally in the dollar had fizzled out, as traders clung on to the idea that China could temper some of its restrictions, after the government on Monday indicated it will make it easier for people to enter and exit the capital.

The biggest macroeconomic risk event this week will be the October consumer price index (CPI), which could be instrumental in setting investor expectations for the likely course of Federal Reserve monetary policy.

On Friday, the October employment report showed much faster job growth than expected, but slower wage growth and a rise in the unemployment rate, suggesting some of the tightness in the labour market may be easing.

For Thursday, median forecasts are for annual CPI inflation to slow to 8.0% and for the core to dip a tick to 6.5%.

“If we can see a moderation in core cpi which I think might be a little bit to imply that but I think if we do see that it will encourage this correction to run a little bit further,” CIBC’s Stretch said.

On the equity market, travel and leisure stocks, led by online betting group Flutter Entertainment and budget airline Ryanair, were among the biggest gainers on the STOXX 600, which rose 0.6%.

The offshore yuan fell 0.7% to 7.2282, but still held near its strongest against the dollar in around a week.

Speculation that China, the world’s largest commodity consumer, might open its economy saw copper jump 7% on Friday in its biggest one-day rally since 2009, while oil rose by more than 4%.

There are at least seven Fed officials scheduled to speak this week, which will help refine the rate outlook with markets now narrowly leaning toward a half-point rate hike next month to 4.25-4.5%.

“We maintain the Fed will see sufficient progress on inflation to pause at 4.75% in February, but the risks are skewed to more hikes that likely bring about a recession sometime later in 2023 or early 2024,” said Bruce Kasman, head of economic research at JPMorgan.

Two-year Treasury yields, which are the most responsive to expectations around inflation and interest rates, were last up 3 basis points on the day at 4.68%, off Friday’s 2007 peak.

Also of note will be midterm US elections on Tuesday where Republicans could win control of one or both chambers and lead to deadlock on fiscal policy.