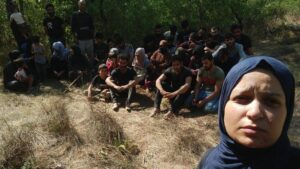 At least 16 women have died and another 15 people are missing after a migrant boat sank off the Greek island of Lesbos on Wednesday night.

Elsewhere in Greece dozens of migrants were rescued when their boat hit rocks near the southern island of Kythira.

Coastguard video showed a group of people trapped beneath a cliff as rescuers pulled them to safety.

Both boats went down within hours of each other on Wednesday night and early on Thursday, hundreds of kilometres apart.

Volunteers joined rescue officials at the top of the cliff face on Kythira, an island off the Peloponnese region of southern Greece.

The migrant boat broke up close to the island’s eastern harbour at Diakofti in winds of up to 70km/h (45mph) and according to Greek reports one of those on board raised the alarm when it got into trouble.

“We could see the boat smashing against the rocks and people climbing up those rocks to try and save themselves,” local resident Martha Stathaki told the Associated Press news agency.

Eighty of the 95 people on board are said to have been rescued on the Kythira coast. Reports say they had originally come from Iran, Afghanistan and Iraq.

Meanwhile, on Lesbos, authorities said the bodies of 16 young women of African origin had been recovered after their boat went down near Thermi. Nine women were rescued and taken to the local hospital at Mytilini. “Already today many lives lost in the Aegean, people are drowning in unseaworthy vessels. EU must act,” he tweeted.

Local officials said the boat had left the Turkish port of Ayvali and Greek migration minister Notis Mitarachi called on Turkey to take “immediate action” to put an end to irregular migrant crossings in harsh weather. “

While Lesbos is a short distance from the coast of western Turkey, Kythira lies some 400km (250km) west of Turkey’s coastline on the Aegean Sea and is on what has become known as the smugglers’ “Calabrian” route, named after their destination in southern Italy.

Last month two migrant boats landed on Kythira carrying almost 100 people, mainly from Afghanistan. More and more crossings are being made from Turkey to the Italian coast, bypassing Greece.