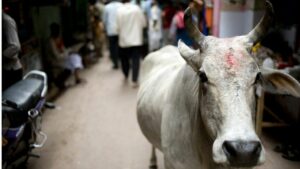 Charitable trusts, that run cattle shelters in the western Indian state of Gujarat, have set free thousands of cows in protest against the lack of promised government aid.

Videos of cows walking through government buildings have gone viral.

Protesters have threatened to boycott the upcoming state election if the government fails to release funds.

The state has reported more than 5,800 cattle deaths, while nearly 170,000 are estimated to have been affected by the disease.

Cows are sacred animals for India’s majority Hindu community, and slaughtering them is illegal in 18 states, including Gujarat.

In 2017, Gujarat tightened its cow protection laws by notifying that those slaughtering a cow could be punished with a life sentence.

An unintended consequence has been a large number of cattle roaming the streets, causing traffic snarls, or landing up at shelters.

In its budget for this year, the Gujarat government had allocated 5bn rupees ($61m; £57m) to maintain shelters for cows and other old animals in the state.

Shelter managers, however, said they had not received any money under the scheme and felt “cheated” by the government.

They added that despite several representations to the government, they had not been offered any solutions.

The Indian Express reported that nearly 1,750 cowsheds run by charitable trusts, which house more than 450,000 cattle, had joined the protest.

“BJP-ruled states like Uttar Pradesh, Haryana, Madhya Pradesh, Uttarakhand are providing support. Even Congress-ruled Rajasthan is offering 50 rupees for one cow. So why has Gujarat failed to support cows?” Vipul Mali, general secretary of the Gujarat Gau Seva Sangh – which runs cow shelters for sick cattle – was quoted by the newspaper as saying.

Reports say in the past few days, cattle have take over roads, local courts and government buildings in several parts of Gujarat.

In one government office, protesters showed up with cow urine and dung.

Police said they had detained 70 protesters in the districts of Banaskantha, Patan and Kutch.

The Gujarat animal husbandry minister admitted that aid had been delayed due to “administrative tangles” and promised to find a “positive solution” in a day or two.

Protesters have now threatened a wider agitation if their demands are not met by the end of the month.