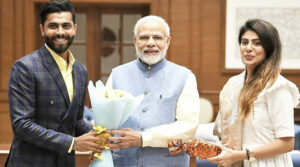 Rivaba Jadeja, who is cricketer Ravindra Jadeja’s wife, will contest from Jamnagar (North) and Hardik Patel from Viramgam

The ruling Bharatiya Janata Party (BJP) on Thursday announced its first list of 160 of 182 candidates, including Rivaba Jadeja and Hardik Patel, for the December 1 and 5 assembly elections in Gujarat, where it has been in power for 27 years. It has denied tickets to 38 lawmakers, including Brijesh Merja from Morbi, where the bridge collapse on October 30 left 135 people dead.

Former chief minister Vijay Rupani is among the top BJP leaders who have opted out of the polls.Rivaba Jadeja, who is cricketer Ravindra Jadeja’s wife, will contest from Jamnagar (North). Hardik Patel, who came into prominence as the leader of the agitation for quota in jobs and education for the Patidar community and defected to the BJP from Congress this year, has been fielded from Viramgam. Darshita Paras Shah will contest from Rupani’s Rajkot West seat. Chief minister Bhupendra Patel will contest from his Ghatlodia constituency.

Rivaba Jadeja was fielded a day after the Gujarat high court on Wednesday dismissed a plea seeking withdrawal of a 2007 mob violence case against BJP’s Jamnagar (North) lawmaker Dharmendrasinh alias Hakubha Jadeja and others, saying the state government is trying to save him “anyhow and at any cost” under the pretext of larger public interest.

Kantilal Amrutiya also features on the list of candidates days after visuals of his rescue work following the Morbi bridge went viral on social media. A five-time lawmaker, Amrutiya lost the 2017 assembly elections to Congress’s Merja. Merja defected to the BJP in 2020 and defeated Congress’s Jayantilal Patel in a by-poll. He was inducted as a minister after Bhupendra Patel succeeded Rupani as the chief minister last year.

The BJP has fielded 14 women as well as 14 Scheduled Caste and 24 Scheduled Tribe candidates. It has given tickets to only three of the lawmakers from Ahmedabad. BJP won 15 of the 21 seats in the city in 2017 and Congress six. Jagdish Patel was named as the party’s candidate from Vatwa after Pradeepsinh Jadeja, a former home minister, said he will not contest the elections.

Former ministers Nitin Patel, Bhupendrasinh Chudasama, RC Faldu, Saurabh Patel, and Kaushik Patel also wrote to the Gujarat BJP chief C R Patil saying they were opting out of the polls. Shankar Chaudhary, a prominent Other Backward Class leader who lost the 2017 elections, will contest from the Tharad constituency.