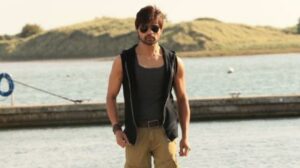 Himesh Reshammiya has unveiled the first look teaser of his upcoming film Badass Ravi Kumar, in which he plays the titular hero. However, it was received with mixed reactions on Reddit and some reactions were as hilarious as his lines in the film.

Singer Himesh Reshammiya is once again going to showcase his acting chops on screen. He announced his next film titled Badass Ravi Kumar on Thursday and shared its poster which features him striking a pose while standing on the bonnet of a car with a gun in his hand. The title announcement teaser was as long as a film trailer and was even more dramatic as Himesh goes about mouthing some hilarious lines meant to scare villains, grooving to a new song titled Butterfly Titliyaan in a midriff-revealing outfit.

However, while sharing the video on Instagram, Himesh informed that the name of the female lead and the director will be announced soon. He even shared a few scenes from the teaser and invited his fans to make their own reels inspired from the same and send them to him.

One such scene featured him giving a warning to a villain who hints of bloodshed. Reacting to it, a Reddit user said, “’Tere shareer mein utna khoon nahin hoga, jitna Raki Kumar ek baar mein……..moot deta hai (your body doesn’t have as much blood as Ravi Kumar pees in one go).’ First sign of prostate or kidney cancer is blood in the urine.”

Another said, “I low key liked it for the first minute then it just sh*t all over the place lol. Let’s go Ravi Kumar. I really want this movie to be a huge hit just for the jokes please I’m manifesting.” One more asked, “Last 5 seconds of the trailer appears as if he is preparing to shoot enemies with his spit, sponsored by Vimal paan masala.” A person even asked, “In the current climate which producer is investing money on Himesh’s movies?” Many others claimed it must be his own production, and a comment even read, “Sab Indian idol ka Paisa Babu bhaiya.”

See also  Kim Ji-Won, The Queen of Grey And Questionable Characters: From Vicious Rachel In The Heirs To The Frustratingly Real Lovestruck In The City

A Reddit user also wrote, “Very excited for all the cringe content coming our way. Also, it’ll be my money’s worth if he pouts his lips the whole time like he does on Instagram.” “Itna confidence chahiye life mein (this is the confidence one needs in life),” read yet another comment.

The film is a spin-off based on his character from the 2014 film The Xpose. Badass Ravi Kumar is an action musical entertainer, which will see Himesh reprising his character of Ravi, who this time is pitted against 10 villains. Himesh not just plays the titular role but has also penned the story and composed music for the film. It will be released in 2023.

In the The Xpose, Himesh played a cop-turned-superstar named Ravi Kumar, who investigates a murder mystery. The film also starred Zoya Afroz and Sonali Raut with Irrfan Khan and Honey Singh in special roles. The 2014 film was directed by Anant Mahadevan from a script by Himesh.