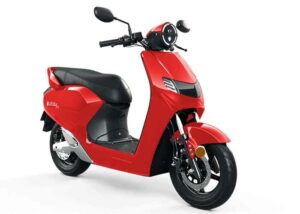 The electric vehicle revolution is well on its way with the Indian automobile market flooded with various electric two-wheeler and four-wheeler options. But if you are planning to buy an EV right now, you might still be on the fence due to various concerns. Maybe you live in an apartment complex where charging is a concern. That is Mooving hopes to step in. After working with delivery agents and e-rickshaw drivers for close to two years, Mooving intends to focus on offering their electric two-wheeler and battery-swapping service to the mass market.

“We found two reasons that are stopping customers in metro cities from adopting EVs. One is the time it takes for charging and the other is the fact that a lot of them live in apartments or apartment complexes,” Tanvir Singh, cofounder of the Gurugaram-based company, explained to indianexpress.com.

Mooving initially started by offering electric two-wheelers and three-wheelers, coupled with battery-swapping services for e-rickshaw drivers and last-mile delivery agents. Currently, there are over 5,000 vehicles on Mooving’s platform that have driven over 4 crore kilometres and have completed more than 500,000 battery swaps.

Under its new model, Mooving offers its customers two options—they can either buy a vehicle and subscribe to battery swapping, or they can rent the vehicle. If you decide to buy its Lectrix electric scooter, there is a large upfront cost of about Rs 55,000 followed by a monthly subscription fee that ranges from Rs 1,249 and Rs 2,999 depending on how much you drive.

If you decide to rent the same scooter, you will have to pay an initial refundable security deposit of Rs 13,800 followed by a monthly charge of between Rs 3,699 and Rs 5,599, again depending on how much you drive the vehicle. According to Singh, the Lectrix scooter and its batteries are manufactured in Manesar, India, while the cells used in the batteries are made in China.

According to Singh, there are several reasons why a battery-swapping solution will appeal to private EV users as well. “If you live in an apartment complex, even if it does have EV charging terminals, it is unlikely that there would be a large number of them. A complex might have hundreds of vehicles. Even if one-third of them were to be replaced by EVs, it would mean that a consumer would have to first plug their vehicle, wait for a few hours for it to be done charging, receive the notification, and then go down and unplug it and park the vehicle elsewhere so that the next person can use it. This is where a battery swapping service could come in,” he explained.

Mooving’s scooters also come with IoT technology on board that will connect to the user’s smartphone. This will give them notifications about range and other parameters. Apart from notifying users when they need to swap out their batteries, Mooving’s app also directs them to a swapping station and reserves a battery for them. According to Singh, the battery-swapping process takes between two and three minutes and users can do it themselves as well at the station.

When asked about safety, Singh said that the batteries are owned by them and they “receive a lot of data about the condition of the batteries, the cells within them and how they are used.” According to him, this data gives the company plenty of insights about the batteries and any possible issues with them and if there is a need to replace or fix the battery before it is used on a consumer’s vehicle.