Hrithik Roshan danced on several garba songs with Falguni Pathak on the seventh day of Navratri. The actor also sought blessings of the goddess at the pandal as he promoted Vikram Vedha. 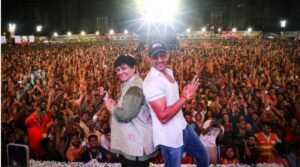 After delivering a smashing performance in his latest entertainer Vikram Vedha, Hrithik Roshan stepped out to feel the festive vibes. The actor visited Falguni Pathak’s garba night on Sunday in Mumbai’s Borivali.

Hrithik and Falguni danced on Gujarati garba ‘Valsadi’ and the singer took to her social media platforms to share pictures and videos of Hrithik dancing with her. In the Instagram post, the singer wrote, “Vasaldi version by Hrithik Roshan. Navratri hein garba toh banta hein.”

Hrithik came to the pandal along with Vikram Vedha director duo Pushkar and Gayathri. Their film released in theatres on September 30 and have received critical appreciation from film critics. However, the film’s box office returns are lower than expected.

As soon as Hrithik went up to the stage to meet Falguni, he greeted the audience with a hearty, “Kasa Kai Mumbai? Kem cho, majja ma?” leaving the venue in a state of frenzy. He then said, “Falguni ji main aapka bohot bada fan hoon. Kya aap mere saath 2 steps karengi (I’m your fan, will you do two step with me)?”. The veteran singer quipped that she cannot match steps with Hrithik like his film songs, but can definitely do some garba steps with him. To which Hrithik requested her to lead and he followed her along with the audience.

Hrithik was also seen seeking blessings at the dandiya pandal. Hrithik also shared his childhood memories of Navratri festival. Speaking in Hindi, he said, “I used to play a lot of garba and dandiya, It used to be a lot of fun. I remember how my grandmother (Ira Roshan) used to put my scrips next to the devi idol to seek her blessings. She used to explain me how the devi has a lot of ‘shakti’, and I’m seeking strength from her and will put it all into my work.” Then, thanking the audience for their love, Hrithik added, “Whatever power you see in my work is because of you all, so thanks a lot for the love.”

Falguni’s garba and dandiya nights are quite popular and have returned to the city of dreams after a gap of two year owning to the Covid-19 pandemic. Many film celebrities pay her a visit to celebrate the festival and meet their fans. A few days ago, Rashmika Mandanna too showed up at Falguni’s garba night to promote her film Goodbye. Rashmika and Falguni danced on steps from her blockbuster hit, Pushpa: The Rise’s Srivalli.

On the work front, Hrithik will now be seen in high octane action drama film Fighter along with Deepika Padukone. The film is helmed by Yash Raj Films’ Siddharth Anand, who also directed Hrithik and Tiger Shroff’s WAR (2019).