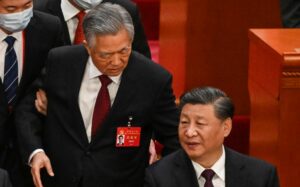 Chinese former leader Hu Jintao has been led out of the closing ceremony of the Communist Party Congress.

The frail-looking 79-year-old was sitting beside President Xi Jinping when he was approached and led away by officials. No explanation was given.

After its week-long congress, the party is expected to confirm Mr Xi, 69, for a historic third term.

The event, held in Beijing every five years, cemented his position as China’s most powerful leader since Mao Zedong.

Hu Jintao, who held the presidency between 2003 and 2013, was on stage when two officials approached him. He said something to Xi Jinping, who nodded back.

Then Mr Hu was escorted out of the Great Hall of the People.

Footage of Hu Jintao being asked to leave the stage is drawing global attention, as people try to work out what has just happened. There are a lot of questions and no answers so far from the Chinese government.

The country’s former leader, at one point, appeared reluctant to move. If that is the case, why? What did he say to the man who replaced him, Xi Jinping, which prompted a nod from China’s current leader and what did he say to his protégé Li Keqing as he tapped him on the shoulder before being ushered off stage?

The two most likely reasons for his departure are that it was either part of China’s power politics on full display, with a leader representing a former time being symbolically removed, or that Hu Jintao has serious health problems.

If he was led away because of ill-health why did this happen so suddenly? Why in front of the cameras? Was it an emergency?

The Communist Party’s mass meetings are normally highly scripted events, leading to speculation that the timing of Hu Jintao’s departure might not have been an accident. He attended the earlier closed-door session on the last day of the Congress, then cameras were allowed in for the final portion of the day. It was just after the cameras had set up that officials approached Mr Hu and indicated that he should go.

Hu Jintao represents a very different China to that of Xi Jinping. He ran a much more collective leadership and had to balance various factions represented on the Politburo Standing Committee. The Hu years were seen as a time of opening up to the outside world and increased tolerance of new ideas.

As general secretary of the Party, Xi has taken the country in a very different direction with him at the “core” and unable to be challenged.

The new Central Committee does not include Li Keqiang or Wang Yang, both seen as economic liberals, both linked to the ideas of the former administration. This points to a new Politburo Standing Committee stacked with Xi loyalists.

In his opening speech at the Congress last Sunday, he hailed the crushing of the pro-democracy movement in Hong Kong as a move from “chaos to governance”. He also reaffirmed China’s right to use force to seize the self-ruled island of Taiwan.

Mr Xi currently combines the positions of general secretary of the Communist Party, president and head of the armed forces. He is also referred to as Paramount or Supreme leader.

On Sunday he is expected to be officially confirmed for a third term as general secretary and to unveil his new leadership team.

In 2018, he abolished the presidential two-term limit, paving the way for him to rule indefinitely.