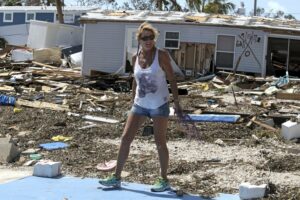 One of the most dangerous storms to hit the US in years has left 2.4 million homes and businesses in Florida without power and floodwaters surging inland.

Dramatic scenes saw a hospital roof blown off, cars submerged and trees ripped out of the ground.

Ian has now been downgraded from a category four to a category one storm.

However, Floridians have been warned that the most dangerous 24 hours lay ahead and the mayor of Tampa has urged people to shelter in place through the night into Thursday morning.

“We are going to get the majority of the rain and the higher winds starting about 20:00, and they are going to last throughout the night,” Jane Castor said during a Wednesday evening briefing.

In Lee County – the south-west region where Ian made landfall – police were prevented from responding to reports of looting at a petrol station because of the storm damage.

As a result, a curfew has been declared “until further notice”.
Lee County Manager Roger Desjarlais said that the Fort Myers community “has been – to some extent – decimated”. According to news agency AFP, some neighbourhoods in the city of 80,000 had been left resembling lakes.

President Joe Biden will receive a briefing on Thursday from the Federal Emergency Management Agency.

Hurricane Ian is now continuing to move north through Florida. Jacksonville International Airport, based in north-east Florida, cancelled all flights scheduled for Thursday.

The National Hurricane Center (NHC) said Ian is going at around eight miles per hour, and is forecast emerge into the Atlantic by Thursday morning.

It is expected to reach Georgia and South Carolina on Friday and will still be at hurricane strength when it does, the NHC said.

Cuba’s western coast was hit by Hurricane Ian on Tuesday. Power has now been restored in some areas after the island was plunged into a total blackout. Two people are understood to have been killed in Cuba and more than 20 Cuban migrants are believed to be missing at sea.