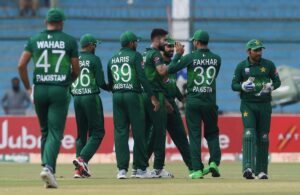 Former Pakistan players Shoaib Akhtar, Aaqib Javed, Moin Khan Waqar Younis and Misbah-ul-Haq have come out strongly after Pakistan’s loss to Zimbabwe. Akhtar blamed the entire set up from Babar Azam the captain to Rameez Raja the PCB chairman. Aaqib Javed said he was shocked to see some of the techniques of the batsmen. And Moin Khan said it seems they never prepared for the bouncy tracks of Australia as they lacked basic technique. Akhtar would also add that India would be out of the world cup at the semi-final stage. Waqar felt the Pakistan openers were batting with a fear that team would collapse if they get out and Misbah questioned if there was any game plan to the bowling.

I have been saying this repeatedly, these openers, the middle order aren’t good enough for us to get success at this level. What can I say?

Pakistan has a bad captain. Pakistan is out of the world cup in the second game. Against Zimbabwe.

What kind of cricket you went to play? For god’s sake, you have lost to Zimbabwe. Don’t you understand your cricket is deteriorating. The management to PCB chairman don’t have brains … we had to play 4 bowlers, we have been playing 3 fast bowlers. Proper middle order is needed, you are selecting something else.

Two good openers were needed who can use the 30-yard circle. Fakhar Zaman is sitting there; you didn’t use him. He is a back-foot player, would do well in Australia…

It’s really really embarrassing. Ultimately, it’s not for your but we have to face the media. We have to sit in India. We have to give answers to the world. What answers can we give now?

The game against India was almost won; you gave them on the plate. You can’t give Nawaz the last over. It’s not his job to bowl the final .. it’s really disappointing.

I had already told Pakistan will come back this week. And India will come back next week after playing semi-final. Voh be koi tees-maarkhan nahi hai (India are also not some unbeatable side) and we … I am so angry I don’t want to say some bad things..

No plans, no middle order, no openers … I was telling if Zimbabwe bowled lengths balls they will win here. I don’t have trust in this team.

Select more “naalayak log (useless people). Don’t let in good people. This is what will happen. Bus roti khaa rahen, no planning.. this is what happens once you don’t bring brilliant minds into play. It’s sad and disappointing.”

What can be more sad than this? What batting is this. The bowlers have to give them a target of 50 runs? The way Mohammad Rizwan was batting … I was shocked to see Haider Ali bat. They haven’t taught him to stop a straight ball? And he is playing for Pakistan? If your technique isn’t there – you can’t even stop a straight ball, then what are the coaches doing in the nets?

We can’t go lower than this.

The selection of shots and execution should be visible. With the ball bouncing, no feet movement to adjust to conditions could be seen. It then means this selection has been completely wrong. No idea. You are playing world cup in Australia and you haven’t prepared properly for the bouncy conditions. It’s lack of professionalism.

It seems we were not ready as professionals. We have been saying for along time that middle order wasn’t good; we needed proper batsmen.

At least Shan Masood did the anchor job. What happened to the rest?

Waqar Younis on A Sports

People are angry and it’s just. The cricket today was heart-breaking. I don’t know whether they were over confident or undercooked, it was disappointing. We didn’t fight. We were very poor. We played terrible cricket. I couldn’t see any planning. We were just lost from the first ball. We were in the same shell – that we will bowl full, knock out the stumps. Not on these hard pitches where there is bounce, grass, there is a way of bowling. I don’t think the coaches or the captain prepared …

Then it was disappointing to see the way openers batted. We didn’t know which way to go. They were running here and there. Run outs. This was Zimbabwe. If it was another team, they wouldn’t even have allowed us to come close.

Our openers Babar Azam and Mohammad Rizwan have turned a bit fearful – I don’t know if its due to grass bounce. They have seen so much success, and you won’t play positively and if you don’t play without the fear that I will get out. I have coached this team also. I get the feeling that they feel what would happen if I get out – our openers have that. But that feeling transfers to the middle order also. There is a way to play T20 cricket and we are not playing that way.

Misbah-ul-Haq on A Sports

What did South Africa do against Zimbabwe last match? There was a clear queue that they were troubled against short ball. We didn’t bowl even one short ball for so long. You have to get them in trouble as soon as they come to bat. Instead, they gifted boundaries at the start. If we keep doing same mistakes in world cups … We knew Zimbabwe could do this; they might have limited batting resources but bowling is good. We have played enough against them and we should have been alert about it. We should have got them as low total as possible.

And our batting. It doesn’t even seem as if we can get 100 runs. Lack of confidence. Even now, anything can happen in this world cup. It’s still open. We have to wake up. We have to get out of this shell.