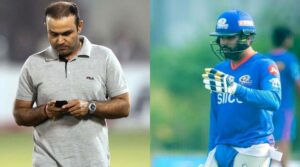 India captain Rohit Sharma had said that the team “didn’t turn up with the ball” in the T20 World Cup semi-final against England, which they lost by 10 wickets.

India’s 2022 T20 World Cup campaign came to a rather sensational end with a 10-wicket loss to England in the semi-final at the Adelaide Oval. India had scored 168/6 batting first, largely thanks to a late charge from Hardik Pandya. England openers Alex Hales and Jos Buttler then came in and sent the bowlers to all parts of the ground, finishing the chase with four overs to spare.

India captain Rohit Sharma said after the match that the team didn’t turn up with the ball, in a comment that did lead to some backlash on social media. Former India batter Virender Sehwag had said later that the team instead probably lost the match in the first 10 overs of their innings. Rohit’s opening partner KL Rahul fell for a run-a-ball five while he himself managed just 27 off 28 balls. Virat Kohli scored 50 off 40 balls but he also was unable to accelerate in the first 10 overs and India found themselves 77/3 after 12 overs.

“If the top order has batted 12 overs to just score 82 runs (77), then expecting the rest of the batters to come in and play fearless cricket and score 100 runs in eight overs, that is also not right. Yes, the average total of this ground may be 150-160 and you made more than that. But then on the day itself, if one batter gets set on that pitch, the average total stops mattering. We have seen this happening a number of times here at the Wankhede or the Feroz Shah Kotla or in Chennai. Today’s game could not have been won with scores of 150-160,” Sehwag said on Cricbuzz.

“New Zealand played a certain way against Australia (in their first match) but they didn’t do that again in the semi-final and they got knocked out. If India feel that they made an above par total and so it is bowling’s fault, I don’t agree with that. We lost the match in the first 10 overs when our batters did not give the kind of start that we were hoping for,” he said.

Rohit admitted that India could not handle the pressure in the big moments. “It’s pretty disappointing how we turned up today. I thought we still batted pretty well at the back end to get to that score, but we were not good enough with the ball. It was definitely not a wicket where a team can come and chase it down in 16 overs. With the ball we didn’t turn up today,” said Rohit.

“When it comes to knockout stages, it’s all about handling the pressure. Depends on the individual as well. You can’t teach anyone to handle pressure. When these guys play the playoffs in the IPL and all that, those are high-pressure games, and they’re able to handle it. The way we started with the ball was not ideal. We were a little nervy, but you have to give credit to the openers as well. They played really well,” he added.