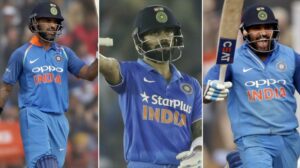 Everyone should have a friend like Hardik Pandya. Someone who would be a calming influence in any crisis. So there was Hardik in a tense huddle with a broad smile on his face. Once again, Virat Kohli was the main speaker in the pre-match team huddle. He did the same against Pakistan too. He ended his passionate monologue with his right handed karate chop landing on his open left palm to make a point. But it was Hardik’s war cry that dispersed the tight circle. Before that he was in his sleeveless vest, the tattoos shining in the sun, talking to Nasser Hussain. Hardik told him why these high-pressure games didn’t pull him down. “I depend a lot on my preparations. If you prepare well, tick all boxes, are confident about your skill set, you know your time will come,” he said. By the way, he ended the chat with a hipster casual tone – “Thanks Nas.”

It was a six over covers off a pacer. And everyone moved on as if it was four. How times change. In the 80s, when once Raman Lamba walloped a six over covers off a pacer, it was outlandish. Especially for an Indian. Was he Viv Richards to even imagine he could do it – and such went the chatter among some of us at school. Now, ah we go, Woakes shouldn’t have pitched it full in the slot. It was a gorgeous hit by Kohli. Pressing back first as he had been doing at nets couple of days ago and then springing forward to lift it up and over.

When Nasser Hussain bantered with Ravi Shastri, mimicking his “tracer bullet” line on air, Shastri would laugh. The mind went back to his response to his famous lines on commentary. Like this tracer bullet.
“It just happened. With the flow, you can’t plan abhi karna hai. When it actually goes like a bullet, you can say it. Someone told me once (about using that word a lot), I told him, ‘enjoy it!’ Every day, you can’t think of new words. Some guy came and told me about tracer bullet thing. That match I told him, “you are seeing it for the 15th repeat, that’s not my fault!” When they keep showing the match 15-20 times, and you go, he has said tracer bullet again! I said it once, you are seeing it 20 times! It’s not my headache na!” he told The Indian Express. Mind it Nasser.

And then Rohit Sharma played arguably the ugliest shot of his career. Sam Curran had a plan, bowl one of his fast swinging balls on Rohit’s pad and place a short mid-wicket. The India skipper loves the flick and he wouldn’t be intimidated by the short English pacer with a boyish look. Second ball of the over is on pads, it’s a decent delivery but Rohit flicks it over the head of short-mid-wicket. On the field, Woakes jumped as high as he could to give the impression that it was a missed chance. Now, Rohit had to assert his status as the world’s premier white ball batter. Next ball he walks at least three steps to meet a short ball and delivers a stroke that would have done a woodcutter proud. After hitting the ball, his left leg is parallel to the ground. This was not the effortless “minimum effort maximum result” but someone playing in the parking lot of his building. Winning Ugly: Mental Warfare in Tennis–Lessons from a Master was a book written by the veteran tennis star Brad Gilbert. It was a best-seller.

Rohit the artist turns bludgeoner; felled chasing a wild one

His timing was off, he was a little late on the ball and the runs were not flowing like he would have liked. In a knockout semifinal, Rohit Sharma wasn’t at his fluid best. An attempted slog sweep off Chris Woakes had hit the toe end of the bat and Sharma for the second time in the game shook his head in frustration. Four overs were up and something had to give. In the next over he worked Sam Curran over short midwicket for a four. But the next stroke was very un-Sharma like. The fluid artist decided that hitting himself out of bad form could be the way out. He moved down the track and smashed the ball with a horizontal bat rather ungainly. The back leg in the air as he pivoted on the other leg. Sharma had dumped elegance for effectiveness.
After lofting it over cover to Chris Jordan, the Englishman would have the last laugh. Keeping his off timing going, he would swing wildly at one that nipped back three balls later. It came off the top of the bat, and Sam Curran dived to end the laboured struggle.

See also  Duckworth-Lewis-Stern (DLS) Method— What Is It And When Is It Used?

Cramped off all width, slow, pitched up: the Ro-miss

The pitched-up offcutter is an important weapon at Adelaide Oval – the lack of pace combined with the long straight boundaries making it harder for batsmen to hit sixes. For the on-pace full delivery, the ground does present a dilemma, especially if there isn’t too much swing, like in this semi-final. Bowlers can overdo that length to try and prevent the cross-batted shots to the shorter square boundaries. And as the boundaries over extra cover from Virat Kohli and Rohit Sharma showed, the on-pace full length can disappear too when allied with some width. But Chris Jordan’s slower, pitched-up delivery to Rohit was on the stumps, denying any width and forcing the straighter hit to the longer rope, causing the Indian captain’s downfall.

Less than run-a-ball at half-way stage, a juicy full toss, Kohli fails to connect, and a loud ‘aargh!’ Kohli’s big heave on the leg fetched him only a run and that show of emotion, not rare for Kohli, also captured the feelings of an Indian fan, who’d have been left frustrated by the inability of the batsmen to get going. Dravid had an animated discussion with Kohli and SKY during the drinks break but the first ball after that was more of the same – a wide ball outside off, a big swing and another miss.

Yesterday New Zealand batted cautiously (critics said timidly) as if they had misread the pitch and aiming for a 160 type total. Today Indians have been batting as if thier mind says we need a big total here but defeated by a slightly slow track. They have been ungainly, going too hard into their shots, led by thier captain Rohit Sharma. A touch desperate as they aren’t sure of the right target to set and worried perhaps that the pitch might quicken up under lights during the chase. It has taken Surya to come and show that you can wait and time the ball here for the big shots. No need to hack. But under pressure to amp up the run rate, he too would hole out to sweeper cover. It was a lovely delivery by Adil Rashid, slowing up the pace, still tossing it up, dragging Surya out of shape and into a mis-timed shot. All through Rashid – called a “match winner” by his teammates Sam Curran and Mark Wood just the other day – showed why he is so valued by his team.

Joss… Dhoni? But Pandya no Pollard

Hardik Pandya smacked one straight over the umpire’s head for a four. Liam Livingstone looked a bit rattled. And Buttler was doing a Dhoni. The next ball, the England captain got a fielder right behind the umpire, knowing that’s the region Pandya gets a majority of his runs. It was a move right out of the Dhoni playbook – the former India captain did the same in the IPL two years ago to dismiss Kieron Pollard. The West Indian ended up hitting straight at the fielder back then. Pandya, though, was more judicious and rotated the strike. Not a wicket, as Buttler would’ve hoped, but at least keeping the leash on.

Despite the short square boundaries at Adelaide Oval, Chris Woakes began with three successive shortish deliveries to Hardik Pandya, whose stronger suit against pace is the fuller length. Teams have successfully pegged Pandya back with the hard lengths in this tournament and Woakes was looking to do the same. That approach comes with a smaller margin of error given the dimensions of this ground, though. But even Chris Jordan, who favours the pitched-up deliveries and yorkers, was willing to use the hard pulled-back length to Pandya.
Sam Curran tried the same tactic, but at his pace, it didn’t come off, as Pandya was able to ride the bounce and thump him flat over extra cover for six. Curran had to change to the fuller lengths.
Then Pandya dug into Jordan too when he bowled full.

Kohli expresses himself, even when being the non striker

A short film on Virat Kohli’s emotions while batting needs to be put together. These days Kohli talks a lot to himself while out in the middle. Even before he went after Haris Rauf in the Group 2 game against Pakistan and pulled off the famous win, Kohli was pumping himself up, talking, shaking a clenched fist, nodding his head. Against England in the semifinals, Kohli was animated. When Hardik dispatched Sam Curran over the cover region for a six, it was Kohli who was at his expressive best. It seems like he is feeding off his teammates to get his adrenaline rush going. Even when he found the boundary, Kohli was telling himself that he should have found a six. He used a pointed index finger in the direction the ball should have landed.

November 26, 2022
‘If Top Order Has Made 80 Runs In 12 Overs…’: Sehwag’s Scathing Take On Rohit Blaming Bowlers For Loss To England 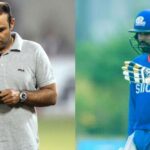 ‘If Top Order Has Made 80 Runs In 12 Overs…’: Sehwag’s Scathing Take On Rohit Blaming Bowlers For Loss To England