Series sewn-up, plans for World Cup figured out, the match was condemned to an obligatory six-hitting fixture. 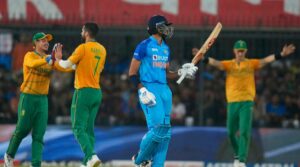 The third umpire wanted confirmation when Tristan Stubbs’s low grab off Suryakumar Yadav – plucked just inches off the grass, a piece of supreme athleticism and anticipation – was clean. But Yadav had already begun galloping back to the dug-out, wearing half a smile, not even clinging onto the last drop of hope. Batsmen usually do linger on, especially as he was caught at deep point and it would have been impossible for him to be certain if the catch was clean or not. Besides, he was the last flickering hope of India overhauling the steep target of 227 South Africa had tasked them with.

Then, this incident summed up the mood of the match. There was a sense of playfulness, a streak of casualness—not complacency or a lack of intensity, but an un-concealable feeling that there was little consequence to this match. For all practical purposes, it was a practice game for India, a glorified warm-up match. The series was already sewn-up, the plans and formulae for the World Cup already figured out, and the match was condemned to an obligatory fixture. Like a wedding you are forced to attend, and you have to engage in artificial conversations with strangers. In essence, a pointless exercise.

For South Africa, though, you could contend they had to restore some pride after successive defeats. Some positives did emerge in their 49-run victory, like the thrilling forty-eight-ball hundred of Rilee Rossouw and the renaissance of Quinton de Kock. But after Yadav’s exit, lethargy wafted into South Africa’s ranks as well. An example: Harshal Patel flicked the ball casually towards Dwaine Pretorius at short mid-wicket. He grassed the catch, but then attempted a direct hit, only to find the ‘keeper de Kock blocking his view. De Kock was midway through his sprint seemingly to congratulate him, in the excitement he forgot to back-up. With a broad smile, he waved sorry.

Pretorius began to giggle and the chance of a missed opportunity to bundle out the Indians at the earliest was soon forgotten. Just before, Pretorius had made the ball hold the line off the seam and it brushed off his pads. But there was not even a stifled appeal from the usually exuberant de Kock. Not an oh-so-close stare from the bowler.

No fire in the chase

As the broadcasters panned the cameras to India’s dressing room, they too were laughing and bantering. The faces betrayed neither dismay nor hollowness. Much before the match was lost, much before the match was even a lost cause, they had put this contest in perspecticve. The defeat would hurt, as all defeats would, but it would not leave them with a restless night or wake them up with a head-spinning hangover.

The chase seldom got alive. Already, Virat Kohli and KL Rahul were sat out of the match. Then, Rohit Sharma perished second ball, inside-edging Kagiso Rabada. Fourth ball of the second over, Shreyas Iyer too joined him. In a high-stakes game, Yadav would have been the automatic at No 4, but it was Dinesh Karthik uniting with Rishabh Pant, who had opened the innings. Iyer, perhaps, was the only batsman ruing the chance to push his case, in the eventuality of injury to a batsman in the squad.

The total already felt like a mountain; it looked a long way away now. Then it caught fire. Pant broke free, tearing Lungi Ngidi apart in a 20-run-over that, alas, ended with Pant mis-slicing a slash to Stubbs. But Karthik did not relent. He tucked into Wayne Parnell, scooping him for a six, then extra-cover-driving him for a four and flicking him over fine-leg. The next over, he thumped Keshav Maharaj for a brace of sixes, before he floundered when attempting a switch-hit off Maharaj. It was frantic, at times chaotic, batting, as though the batsmen were given the licence to just freewheel, without bothering about orchestrating a chase in the conventional sense.

Providing Pant (27 off 14) and Karthik (46 off 21) some batting time would have been perhaps the only agenda. To a certain degree, they did get some practice. Coach Rahul Dravid told the host broadcasters after the end of the match as much: “Today was an opportunity to give guys who haven’t had much batting to get some time. It’s hard on guys like Rishabh, Dinesh. Wish both of them could have continued, they were batting beautifully. Four-five overs more and it could’ve been a lot closer. Happy with the way we kept going, Harshal and Deepak and the other guys.” But there was no scope for a what-could-have-been narrative.

But even then Deepak Chahar and Umesh Yadav reignited sparks of a distant win, dusting up memories of Anil Kumble and Javagal Srinath against Australia in 1996.

But anxiety had not clutched the crowd. There was no hushed silence, tearing hair or chewing nails, or faces sunk in hands. They just roared and heaved and celebrated the night for what it was—a celebration of boundary hitting. South Africa struck 15 fours and 16 sixes; India hit 15 fours and 11 sixes themselves.

There was no respite for the bowlers; the track is the most inviting one for batsmen in the country. There was little sideways movement as in Thiruvananthapuram; the dimensions of this ground are so small that even mishits would soar over the ropes, those that blazed off the middle would land in second or third tiers, into the joyous crowd, who were seldom starved of batting fireworks at this venue. No total is an assurance here; only those batsmen in as wretched a form as Temba Bavuma would struggle. The South Africa captain teetered to three sweaty runs from eight balls before perishing.