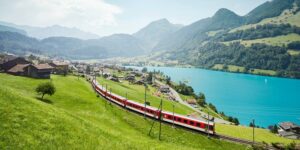 Aimed at providing a secure, creative, responsive and sustainable tourism sector, India is planning to bring a National Tourism Policy 2022 this year

Aimed at providing a secure, creative, responsive and sustainable tourism sector in the inclusive development journey of the country, India is planning to bring a National Tourism Policy 2022 this year.

Union Minister for Tourism G. Kishan Reddy made the announcement on Wednesday while speaking at the day-long National Conference on Tourist Police here in the national capital.

“Our aim is to create a secure, creative, responsible and sustainable tourism sector in India’s inclusive development journey.”1

The minister said people from across the globe not only come to India as a tourist destination, they visit here to get solutions to their many problems. “Several foreigners have spent their entire lives here after they came in touch with saints at places like Varanasi (Uttar Pradesh) in India.”

“We have to focus on these aspects as India’s tourism provides peace and solution. PM Modi aims to make India a major tourism sector in future. In this mission, the safety and security of tourists is a major concern.”

The minister also pointed out that India has better natural beauty compared to New Zealand, Switzerland and African countries, and emphasised that “we have to explore those destinations and keep on doing their branding across the world as well as inform our new generation”.

“Tourism sector will play a big role in India becoming a developed country when we celebrate the country’s 100 years of Independence in 2047,” Reddy said at the event, mentioning “tourism sector has contributed nearly 5.19 per cent in India’s Gross Domestic Product (GDP), which is not a small role”.

Reddy sought the help of all stakeholders participating from different states in the conference to participate in tourist police, saying that the tourism sector has helped in creating 15.34 per cent of employment in India during 2018-2019.

Noting that India has emerged as the fifth biggest economy in the world under the leadership of Prime Minister Narendra Modi, the minister also mentioned how the tourism sector faced a major setback during the Covid-19 period and it affected not only India but also across the world.

He said that domestic tourism in Jammu and Kashmir has seen a tremendous uplift in the last 40 years, which is a good sign.

Presently, Reddy said, India has been moving forward rapidly in the tourism sector but stressed on the need to rethink all aspects to make India a major tourist destination by providing a safe and secure environment for tourists considering the big target.