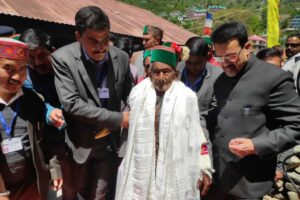 A 106-year-old independent India’s first voter Shyam Saran Negi passed away at his native place in Kalpa after he casted his last vote for the 34th time for the upcoming 14th Himachal Pradesh Assembly elections that is scheduled to be held on November 12, in Kinnaur on Saturday.

India’s first voter Shyam Saran Negi, who died on Saturday at his home in Himachal Pradesh’s Kalpa, had insisted he wanted to cast his vote at the polling station rather than exercising franchise through postal ballot.

Taking note of his health condition, Negi was however urged to cast vote through postal ballot, his grandson Deepak Kumar told PTI.

“He was insisting that he will go and vote on November 12 at the polling station in primary school Kalpa, where he had first cast his vote but he was facing difficulty in walking and standing and was advised against going there,” he said.

Three days after casting his vote for the 34th time, Shyam Saran Negi died at the age of 106. Negi, who was the Election Commission’s brand ambassador, had voted for the Himachal Pradesh assembly polls through postal ballot on November 2, the poll panel said earlier.

“It was for the first time in his life when he cast his vote through postal ballot,” Deepak said.

Over the years, Negi emerged as a role model for the younger generation, as he kept on exhorting them to vote and elect good leaders, he said.

“My grandfather always used to tell everyone that one must always exercise the right to vote,” said Deepak, a government contractor, who also works in the tourism sector.

In 1951, a young Negi made history when he exercised his franchise in Kalpa becoming India’s first voter.

Negi, who had never missed voting in any state or general election, was a VIP of sorts whenever he went out to vote, with the administration also rolling out a red carpet for him.

Polls were held in Chini, present-day Kalpa in Kinnaur district, which borders Tibet on the east, before other parts of the state in 1951, anticipating heavy snowfall in higher altitude areas, when Negi first cast his vote.

His house is in Kalpa’s Kanang Saring, famous for its high-quality apples, situated at an altitude of nearly 10,000 feet.

During a poll rally in Sundernagar in Mandi district on Saturday, Prime Minister Narendra Modi expressed condolences over Negi’s death.

“Just a few days ago, Negi had cast his vote through postal ballot for the Himachal Pradesh polls. Even before his demise, he discharged his duty,” Modi had said, adding Negi’s outlook toward democracy will inspire the people of the country, especially the youth.