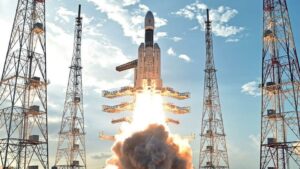 Preparations are in full swing in India’s spaceport at Satish Dhawan Space Centre(SDSC), as the country gears up for the maiden commercial launch of the GSLV Mark3 rocket. Standing 44-nearly metres tall and weighing 640 tonnes, the GSLV Mark 3 is India’s heaviest operational rocket. In a significant step-up for India in the global commercial rocket launch market, the GSLV Mark 3 will be making its maiden commercial flight by October-end, to orbit satellites from UK-based OneWeb.

The three-stage GSLV Mark3 rocket is powered by a solid-fueled first stage that is comprised of two strap-on boosters, followed by a liquid-fueled core stage and the final cryogenic stage. While the first two stages are responsible for lift-off and propelling the rocket out of the earth’s atmosphere and into space, the final cryogenic stage provides it with high velocity and injects the satellites into the desired orbit.

The GSLV Mk3 is a special rocket for India, as it has a track record of delivering total success in the four launches it has had to date. So far, the rocket has had flights in 2014, 2017, 2018, and 2019. The high-profile Chandrayaan-2 lunar mission was also carried out on the Mk3 rocket in 2019. This is also a vehicle that ISRO has pinned high hopes on for the Gaganyaan human spaceflight mission, as this rocket is being modified to carry Indian astronauts to space.

At present, the two solid strap-on boosters and the liquid core stage of the rocket have been fully integrated at the second launch pad at the Satish Dhawan Space Centre, Sriharikota. The mission update added that the 36 satellites from OneWeb have successfully undergone health checks and have been assembled with the dispenser unit. In the coming days, the integration of the cryogenic upper stage (the final stage) of the rocket and the integration of the payload fairing( protective shield that houses the satellites) with 36 satellites will take place.

NewSpace India Limited(NSIL), the commercial arm of ISRO, has signed two launch service contracts with Network Access Associated Limited(OneWeb), UK for launching OneWeb LEO Broadband Communication Satellites on board ISRO’s heaviest launcher GSLV Mark 3. This is a historic milestone for India as it will mean the foray of GSLV Mark3 into the global commercial launch service market.

OneWeb is a global communications network powered by space, enabling connectivity for governments, businesses, and communities. It is implementing a constellation of Low Earth Orbit satellites. India’s Bharti serves as a major investor and shareholder in OneWeb. Recently, WION reported about the OneWeb passenger satellites having arrived at the Chennai airport in India, from the US.