Confirming his father’s demise in a tweet through the official Twitter handle of Samajwadi Party, Akhilesh Yadav said “My respected father and everyone’s Neta-ji has died.” 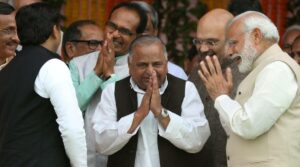 Samajwadi Party founder Mulayam Singh Yadav passed away on Monday after a prolonged spell of illness. He was 82. Confirming his father’s demise in a tweet through the official Twitter handle of Samajwadi Party, Akhilesh Yadav said “My respected father and everyone’s Neta-ji has died.”

Mulayam Singh Yadav was a three-time Chief Minister of Uttar Pradesh and also served as the Union Defence Minister in the HD Deve Gowda government in 1996-97.

Expressing his grief on the passing away of the veteran politician, Prime Minster Modi said, “Mulayam Singh Yadav’s demise pains me, he was a remarkable personality and was widely admired as a grounded leader.”

“He served people diligently and devoted his life towards popularising the ideals of Loknayak JP and Dr. Lohia and was a key soldier for democracy during the Emergency,”the PM tweeted.

BSP chief Mayawati also took to twitter to express her condolences on passing away of the veteran Samajwadi Party leader.

President Droupadi Murmu termed the demise of Yadav an “irreparable loss” to the country. “‘Dharti Putra’ Mulayam ji was a veteran leader associated with the land. He was respected by people of all parties. My deepest condolences to his family members and supporters!” the president tweeted.

Expressing his condolences to Yadav’s family, Congress leader Shashi Tharoor said, “A political giant has passed. A great loss to all Indians.”

“Received the sad news of demise of former Chief Minister of UP and Samajwadi Party leader Mulayam Singh Yadav. May almighty rest his soul at his feet and give strength to his family and admirers to bear the loss,” Arvind Kejriwal tweeted.

The CM recalled that Mulayam, who served as the chief minister for three times, worked for the welfare of the poor and weaker sections throughout his life.

The Uttar Pradesh government has announced a three-day state mourning on the demise of the veteran politician.

Union Home Minister Amit Shah said that Mulayam Singh Yadav’s death marks the end of an era in Indian politics .”During the Emergency, he raised his voice for the restoration of democracy. He will always be remembered as a grassroots mass leader,” Shah tweeted.

“Netaji was one of the tallest socialist leader our country has seen,” NCP leader Supriya Sule tweeted.

Expressing his condolences, Karnataka CM Basavaraj Bommai said, “A true son of the soil, Mulayam Singh Yadav was a leader of the masses.”

“He was a people’s leader. He devoted all his life to the welfare of the poor. He used to respect all religions and fight for all religions,” National Conference leader Farooq Abdullah was quoted saying on the demise of the veteran SP leader by news agency ANI.

Former prime minister Manmohan Singh said that not only was Yadav the icon of the Socialist Movement, but he was also a great parliamentarian and a distinguished administrator who devoted his whole life to the service of the poor and other backward communities.