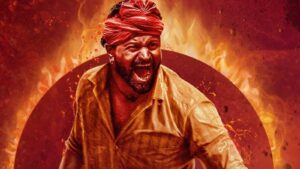 Actor and director Rishab Shetty’s Kannada offering Kantara performed exceedingly well at the home box office, prompting the makers to eventually release it in other languages as well. The film has crossed Rs 100 crore mark worldwide with the majority of the collections coming from the Kannada version of the film. The film’s Hindi version is also doing well and is expected to out-earn actor Ayushmann Khurrana’s Bollywood release Doctor G from Tuesday.

Kantara revolves around a demi-god, who takes the land of forest from a king and grants him happiness in exchange. Eventually the king’s son grows up to become greedy and wants the land back, leading to his downfall. The film is directed by Rishab, who also stars in the leading role.

According to a report in Boxofficeindia.com. Kantara performed well in the Hindi sector on Monday and collected somewhere in the bracket of 1.25-1.50 cr, which would mean that it has witnessed 40-50 percent jump from Friday. The film has collected Rs 9 crore in nett collections at the Hindi box office within four days of release. The film is expected to do a business of Rs 12.50 to R 13 crore in its first week.  The film’s Telugu version has earned Rs 10 crore within two days of its release.

Doctor G’s drop in footfall is mainly seen in Delhi and UP theatres, which has affected the overall collections on Monday. According to trade expert Atul Mohan, Doctor G collected around Rs 1.15 crore on Monday.  The film, which revolves around a medical student, who has inhibitions about being a male gynecologist, got mixed reviews.

On home turf, Kantara is the 6th highest grossing Kannada film of all time with over Rs 100 crore in collections. The highest Kannada earner this year is Yash’s KGF 2 with Rs 1207 crore, followed by KGF 1 with Rs 250 crore. The third spot is filled by Kiccha Sudeep’s Vikrant Rona with Rs 159 crore earnings.

Rishab is thrilled with the success of the film, which has broken records at the Kannada box office. Rishab, in an interview with India Today, said, “The divine spirit and energy attached to the film has made it a blockbuster today. Also, the people of Karnataka who have promoted the film to their friends and the pride they feel is the reason behind the success of Kantara.”