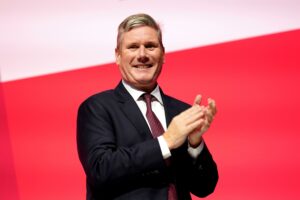 Keir Starmer has called for the general election in the UK. He said that the people of Britain “deserve so much better than this revolving door of chaos.”

As Liz Truss announced her resignation as UK PM, Labour Leader Keir Starmer has called for an immediate general election. In his statement, Starmer said that the people of Britain “deserve so much better than this revolving door of chaos.” He stated that the Tory does not have the mandate to “put the country into yet another experiment.” Starmer’s statement comes after Liz Truss resigned as the Prime Minister of the United Kingdom after serving only 45 days in office.

Keir Starmer stated that Tories cannot respond to their “latest shambles” by “clicking their fingers and shuffling” the people without the consent of British people. He emphasised that the UK is not the “personal fiefdom” of Tory. He said that Tories in the last few years have set record-high taxation and created a cost-of-living crisis. He underscored that people in the UK after facing £500 a month extra on mortgages due to the Tory leadership.

‘We must have chance at a fresh start’: Starmer

Starmer further added, “They do not have a mandate to put the country through yet another experiment; Britain is not their personal fiefdom to run how they wish.” He stressed that the people of the UK deserve a “proper say” on the nation’s future and they must be given the opportunity to compare Tory’s “chaos” and Labour’s plans to grow the economy for working people and rebuild the nation for a “fairer and greener future.” In his statement, Starmer said, “We must have a chance at a fresh start. We need a general election – now.”

On October 20, Liz Truss announced her decision to step down as UK’s Prime Minister after just 45 days since assuming office. She will remain as UK PM until her successor is chosen. In her statement, Truss said, “We delivered on energy bills and on cutting national insurance. And we set out a vision for a low-tax, high-growth economy that would take advantage of the freedoms of Brexit. I recognise though, given the situation, I cannot deliver the mandate on which I was elected by the Conservative Party.” She further stated that she informed King Charles III about her resignation as leader of the Conservative Party. Truss said that she became PM of the UK at a time of economic and international stability.