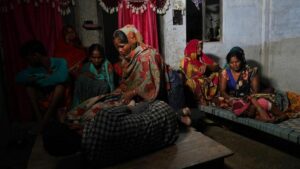 Just hours after two teenaged sisters were found hanging from a tree in the northern Indian state of Uttar Pradesh earlier this month, police said they had solved the crime and arrested six men.

But the families of the victims and the accused have raised serious questions about the investigation, saying their version of events is very different from that of the police. There has also been criticism about some politicians and a section of the media intensely focusing on the religion of the accused.

The BBC’s Geeta Pandey and Vineet Khare travelled to Lakhimpur district, just over 200km (124 miles) from the state capital, Lucknow, to piece together the story of a crime that’s made headlines in India.

The police story – arrests and confessions

Less than 24 hours after the crime, police held a press conference where they named the arrested men: the main accused – a Dalit neighbour of the victims’ family – and five Muslims from a nearby village.

Superintendent of police Sanjeev Suman said the men had “given confessions” and gave details of what happened.

He said “[the main accused] had introduced the girls to two of the Muslim men and they became friends” and that they went “willingly with them on their bike”.

“The accused said they got angry and raped and strangled the girls because they were putting pressure on them to get married. They then called two more associates and, with their help, hanged the girls,” he added.

The police claim has been strongly contested by the families of the accused who say their sons are innocent, that they have been mistreated in custody and that some of them are minors.

What the girls’ family says

The girls’ family has also questioned the police’s version, saying it maligns their daughters.

The sisters – 17 and 15 – were kidnapped by three men who came on a motorbike, says their mother, the only witness to the abductions.

See also  Morbi Wants The Jewel In Its Crown, The Hanging Bridge, Rebuilt

“When I tried to chase them, one of the men kicked me in the stomach and I fell down,” she told the BBC, tears rolling down her cheeks. By the time she was back up on her feet, she says her daughters had disappeared in the nearby fields.

The two-room house of the Dalit (formerly known as untouchables) family sits next to acres and acres of sugarcane fields and it’s easy to get lost amidst the tall crops.

The girls’ father said he was returning from the fields when his wife relayed the bad news.

The villagers formed search parties and started scouring the sugarcane fields. Two-and-a-half-hours later, they stumbled upon the girls’ bodies, hanging from a tree, not far away from their home.

“Suddenly everyone started shouting, ‘they’re here, they’re here’,” he said, wiping away his tears. “We immediately informed the police,” he added.

The family contests the police version that the girls knew the accused. The picture they paint of the sisters is of hard-working girls who did all the housework and kept to themselves.

“Our girls were very simple, police are making up stories about them,” adds the father. 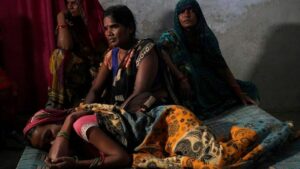 The accused – and a gunshot

A couple of kilometres from the victims’ home are the homes of the five Muslim accused.

Their parents say they have no idea if their sons knew the sisters, but they insist that their children are not murderers.

The father of one of the accused – who the police claim was arrested following a face-off in which he was shot in the leg – breaks down repeatedly while talking to the BBC.

He says the police reached their home late at night and asked him to call his son who was on his way to Hyderabad where he worked.

The son got down from the bus in the town of Pilibhit, from where he was arrested.

See also  Explore How Specially-Abled People Can Be Put In Different Categories In Civil Services: SC To Centre

“I was with the police in their vehicle, but they put my son in another car. They did not even let me meet him,” his father alleges.

“I later heard that my son was shot in the leg. I have no idea why they shot him. Police say it was an encounter, they shot him because he tried to run away. But he wasn’t running away, he was returning. Why would he do that if he intended to run away?” he asks.

“If he’s guilty, hang him but at least do an investigation properly,” he says, adding that he thinks only a federal inquiry can bring out the truth.

The families also dispute the police claim that the accused are all adults.

According to their official government-issued identity cards, one of the accused was born in 2008 which would make him 14 while another is 17. The mothers of two others also claimed that their sons were not yet 18. One of them showed an ID card that would put her son’s age at 18, but she maintained that he was only 17 years old.

Mr Suman, however, rejected the families’ claim. “There is no evidence to suggest that these accused are minor. The medical evidence also points to the fact that they are adults. So, unless we get any information to the contrary, we are treating them as adults,” he told the BBC.

Although both Dalit and Muslim villagers have told the BBC they didn’t think there was any religious angle to the crime, some members of the state’s – and India’s – governing Hindu nationalist Bharatiya Janata Party (BJP) have made that link.

Speaking on a prime-time debate on a TV channel, BJP spokesperson in Uttar Pradesh Anila Singh suggested the crime could be a case of “love jihad” – a term radical Hindu groups use to imply that Muslim men prey on Hindu women to convert them to Islam through marriage.

“The investigation will reveal whether it was a case of love jihad or not,” she told the BBC, adding that “it could be, because we have seen such cases happen not only in Uttar Pradesh, not only in India, but in the world as well. It is a raw reality. Yes, love jihad happens”.

The case has also drawn comparisons with the alleged gang-rape and battery of a 19-year-old Dalit girl in the state’s Hathras district two years back which had made global headlines.

Despite the woman naming her four upper-caste Hindu neighbours as her attackers, the police took days to arrest them. And a BJP leader in the state held a rally in support of the accused. 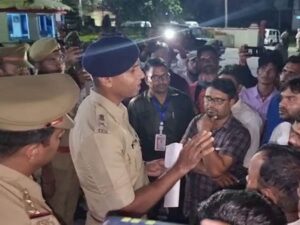 Although many have praised the police for solving the Lakhimpur case so quickly, some villagers and local journalists have questioned the “tearing hurry” in announcing the names of the accused.

They say it ties in with the marginalisation of the minority Muslim community in the state – an accusation denied by the local BJP legislator Shashank Verma.

“The investigation is being done in a very responsible manner. The religion of the accused is inconsequential. A criminal is a criminal,” he said.

Back to the crime scene

Last Wednesday, exactly a week after the teenaged sisters were found hanging, police took four of the accused back to the Tamoli Purva village to “recreate the crime scene”.

Among them was the one who was shot in the foot, walking with a slight limp, with his right leg in a plaster cast.

As they walked surrounded by policemen, a reporter thrust a microphone into their faces and asked if they felt remorse for their actions.

“We had nothing to do with this,” said one of them. “We were not even there.”