The photo of over 40 European leaders surrounding the French president on Thursday ensured a symbolic image of unity of the continent faced with Russia’s invasion of Ukraine, making the inaugural summit of the European Political Community an initial success for Macron, who launched the idea a few months ago. 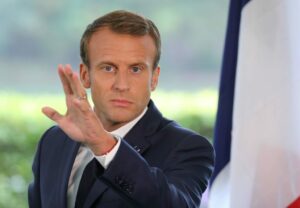 The photo of over 40 European leaders surrounding the French president on Thursday ensured a symbolic image of unity of the continent faced with Russia’s invasion of Ukraine, making the inaugural summit of the European Political Community an initial success for Macron, who launched the idea a few months ago.

“It’s a great day for you,” Czech Prime Minister Petr Fiala told Macron when welcoming him for the meeting at the Prague castle in the Czech Republic.

The forum aimed at boosting security and prosperity across the continent brought together existing EU members, aspiring partners in the Balkans and Eastern Europe, as well as Britain and Turkey.

Russia was the one major European power not invited, along with its neighbour and supporter in the war in Belarus.

Ukrainian President Volodymyr Zelenskyy, who made a speech via video-conference, said: “We have received not just another format of cooperation in Europe, but an extremely powerful opportunity to restore peace in Europe.” Other leaders thanked Macron for his initiative, despite initial concerns from some that it might slow down expansion of the European Union.

At a news conference, Macron said the meeting had sent a “powerful” message. “At the scale of the continent, we’re trying to fix problems,” he said.

The next meeting will be held in Moldova in the spring.

In Prague, Macron continued his diplomatic activism. That went from improving the complex French-British relations to trying to ease some regional tensions.

“What we’re talking about is how the UK and France can work more closely together,” she said.

Alongside European Council President Charles Michel, Macron was able to gather around the table the leaders of historic foes Turkey and Armenia as well as Azerbaijan.

Last month, Armenia and Azerbaijan negotiated a cease-fire to end a flare-up of fighting that killed 155 soldiers on both sides.

Macron and German Chancellor Olaf Scholz also met successively with the leaders of Kosovo and Serbia.

The EU has overseen years of unsuccessful talks to normalize relations between the two countries, saying that is one of the main preconditions for their eventual membership in the 27-nation bloc. Serbia refused to recognise Kosovo’s 2008 declaration of independence.

First elected in 2017, Macron has always promoted an ambitious pro-European approach and at each occasion sought to play a key role in global diplomacy. Russia’s invasion of Ukraine only reinforced his views.

In April, Macron was reelected for a second term, winning over far-right, nationalist rival Marine Le Pen in the second round.

It bolstered his standing as a senior player in Europe, as the other heavy weight, German Chancellor Olaf Scholz, is still relatively new to the job after succeeding Angela Merkel last year.

Macron also held the rotating presidency of the European Union during the first half of the year, championing sanctions on Moscow as punishment for its war on Ukraine.

At home, though, he appeared weakened after June parliamentary elections made him lose his majority at the lower house of parliament, the National Assembly, forcing him into political maneuvering.

Yet his popularity remained relatively high throughout summer, in part thanks to a series of domestic measures to help the French cope with rising prices of food and energy, including a cap on gas and electricity prices.

A strong advocate of multi-lateralism, Macron will soon get other occasions to promote his views on the international stage.

He is expected to head next month to Egypt for the next United Nations summit on climate change and to the summit of the Group of 20 leading rich and developing nations in Bali, Indonesia.

He will then travel in early December to Washington for the first state visit of President Joe Biden’s tenure, in a sign that relations between Paris and Washington have come full circle.

The Biden administration since has heaped praise on Macron for being among the most vociferous Western allies in condemning Russia’s attack on Ukraine.