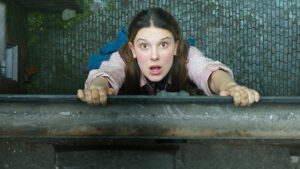 She climbs a tree and scrapes her knee, her dress has got a tearThis line about novice Maria in Sound of Music, who never did the expected, could very well be about Enola Holmes, except she climbs buildings and gets shot at.

The teenage sister of ace sleuth Sherlock Holmes is back for a second romp on Netflix and manages to get into more scrapes than we thought she was capable of when we first met her two years ago.

In Enola Holmes 2, Enola (Millie Bobby Brown) is out to prove herself as a detective and opens an agency, only to be rejected by potential clients disappointed with her gender, her age and the fact that she is not working with/ for her famous brother. She gives up on getting a case till a little girl, Bessie, comes calling, urging Enola to find her sister who has gone missing.

What follows is a frolicking ride of fun and feminism as Enola tries to look for Sarah Chapman — the character and plot point based on the historical figure of the same name who was one of the leaders of the Matchgirls Strike in 1888.

Brown is as delightful as she was the first time playing the fourth wall-breaking, feisty firecracker with a point to prove — that she is Sherlock’s equal! But she tempers that well with an emotional side that doesn’t see people just as parts of a puzzle, which might be seen as a negative by Sherlock, but definitely makes her a better person. Also, she is struggling with regular teenage things like having a Lord-sized crush (Tewkesbery, of course) but wanting to be a woman who doesn’t need a man.

This time around, Sherlock Holmes (Henry Cavill) has more to do and it is an absolute treat. Not to say that Brown needed any backing to hold the movie on her own, but Cavill is ‘bah’ as the idiosyncratic detective as he is blah as a caped superhero. With a more coherent and intricately woven story this time — with “the important parts of it being true” — both the Holmes siblings end up having to join hands as their cases converge and the movie is at its best when the two play off each other. The mid-credit scene makes it clear that the directors know Cavill is quite the fan-favourite.

Helena Bonham-Carter as the troublemaking feminist mother of the Holmes siblings also gets more to do this time, including breaking her daughter out of prison, blowing things up and taking on and winning policemen in hand-to-hand combat. But the scene-stealer is David Thewlis as Superintendent Grail. Without spoiling anything for those who haven’t seen the film yet, Thewlis is making a point of acing unlikeable characters (remember The Sandman?).

Is Enola Holmes 2 a great mystery thriller suitable for the name of Holmes? No. But it is damn good fun and keeps you entertained, which is perfect for when you get tired of all the grim, weighty shows that are streaming on Netflix alongside it. And it has enough going for it to perhaps get a third instalment.