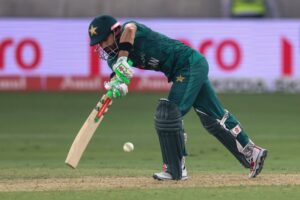 Pakistan opener has been in the habit of sending a note to his agent, friend, and mentor Talha Ramani ahead of important games.

Mohammad Rizwan has a habit of sending a note to his agent, friend, and mentor Talha Ramani ahead of important games. Sometimes, it would be how many runs he will score or whether Pakistan will win. His whatsApp note before the semi-final against New Zealand was: ‘MoM, today’ (Man of the Match). And that’s what he ended up with for his 43-ball match-winning 57 at the end of the World T20 semi-final that Pakistan won by 7 wickets.

Where do you start with Rizwan? The lip-creamed motor mouth with an infectious energy behind and front of the stumps, the never-say-die spirit that has moved him from hospital room to World Cup final in hours, or the batsman who had problems on the off-side and has been slammed by fans and former Pakistan players recently?

Perhaps, it’s best to start with the man’s reaction to bleak on-the-brink moments. Like this one time in December 2020, when his career was on the line.

During a T20 series in New Zealand, the then coach Misbah-ul-Haq had made him open in T20s but two failures eventuated. Everything hung on the last T20. If he failed, even Misbah couldn’t have saved him from the axe, went the chatter. The selectors might have fallen back on Sarfraz Ahmed, the ex-captain and wicketkeeper who had led them to the famous Champions Trophy triumph.

“You know what he did?” His agent and mentor Talha Rehmani told The Indian Express.

“He sent me a picture of something he wrote on a paper. It read: 76 not out. Man of the match. The 76 was crossed out and he had written on the side, ‘Allah, apni shaan ke mutaabiq de de! (Allah, you give according to your Greatness!) Rizwan made 89 that game, and hasn’t looked back since. That was probably his last chance, not just as an opener but possibly as a player in the white-ball format. And he has this strange confidence, moved by faith in his own skill, hard work and God. It’s a combination that has stood by him through all his lows in life.”

Now to the moment in the World T20 semi-final against New Zealand. For the man, whose off-side game has been questioned and considered the reason for the recent fallow run, the test came first ball of the chase. Trent Boult smeared a short-of-length ball across him but offered a touch of width. Still, there it hung, teasing Rizwan, as if asking him: Do you have it in you? What you gonna do?

Rizwan replied with a thunderous slap. The ball was thrown back from the cover point boundary. “He should stop thinking about playing on the leg side. If he decides that, the bat will automatically come down a lot straighter. If he can hit a couple of fours on the off side, then the bowlers will start to play into his hands. He can then play his leg side shots. But first, he has to open up that off side,” Misbah-ul-Haq, the man who had made Rizwan open in the T20s, had told A Sports a day before.

It played out exactly that way. After one more powerful hit to cover boundary, the kiwi pacers played into his hands. In the fifth over, Tim Southee offered a couple of length deliveries in the corridor outside off and Rizwan swiped it, as is his wont, to the wide long-on boundary.

Even his lip cream had evinced chatter from the fans and Wasim Akram had to shut one such query on television, asking “Are you so idle, don’t you have anything else to ask?” Now, they were dancing in the aisles at SCG, one fan breaking down even when he reached his 50. As Shadab Khan told Matthew Hayden, “Welcome to Pakistan Cricket”.

There were issues all right, with his batting. Not enough to test him in a ODI or longer form, but when pressed for runs in T20 format, he was being tied up a touch. Especially, at this world cup, as the teams started to bowl at the fourth-stump at him. “They are generally bowling out swingers and even if the ball comes in, it comes in from the fourth stump outside off. He needs to counterattack. Think differently,” Misbah would say.

He then brought up the two inside-edged bowled dismissals of Rizwan in the world cup to accentuate his point. “Why did he get those inside-edges? When you try to play to the on side, the bat automatically comes down at an angle. His bat at times comes down from well outside off, at an angle. If he can get it closer to the body, much straighter, he will be fine.”

Born in a small house to a joint family in Kakshal, a neighbourhood in Peshawar, Rizwan’s father works in a dispensary at a hospital; a very religious man who didn’t want his son to waste his time playing cricket. The boy, though, wasn’t that keen on academics and would cop beatings from his father for his love for cricket. “They lived in a small narrow gully and the father would be surprised to see numerous men and boys land up at his home to draw out his son to play in their team.”

When he started to become a wicketkeeper, everyone persuaded him not to bother. “But he is a stubborn man; it’s almost as if disbelief is his fuel. ‘Agar mehnat karoonga, toh log khamosh ho jayenge, bhai’ (If I work hard, people will fall silent)” Talha says. Good things kept happening, he rose to World No.1, his ambition for a long time, and just when tongues began to wag again, he silenced them with a rousing fifty.