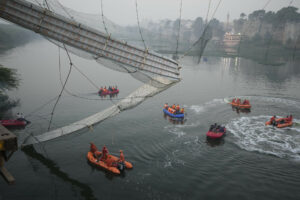 Questions are being asked in India after a popular foot bridge collapsed, plunging scores of pedestrians into a river in the western state of Gujarat.

The horror in the town of Morbi on Sunday evening is one of the worst tragedies in India for years, killing 135 people, most of them women, children and the elderly.

The BBC spoke to survivors, first responders, local journalists and officials to piece together a story of needless tragedy.

Local residents and journalists blame the company which operated the bridge – and the police and local authorities are also accused of failures.

The minutes before the disaster

Just after 18:30 (13:00 GMT) on Sunday, Mahesh Chavda and two of his friends bought their tickets and stepped onto Morbi’s swaying ‘jhulto pul’ (hanging bridge).

It’s described by the state’s tourism website as a “technological marvel” and is popular with sightseers – it had been Mahesh’s favourite go-to place ever since he’d been a child.

Spanning the Machchu river, the 230m (754ft)-long structure connects Darbargarh Palace and Lakhdhirji Engineering College. Dates for its construction vary, but locals say it was built in the 1880s by the local Maharaja, Waghji Thakore.

“I used to visit it with my parents and, for the past few years, I’d go there every Sunday with my friends,” says Mahesh.

He was “excited” when he heard last week that the bridge had reopened and the 18-year-old and his friends decided to resume their Sunday evening routine.

Sitting on his hospital bed with plaster around his neck, Mahesh told me that as they approached the bridge, they could see that it was overcrowded.

“So we thought we’d wait a bit but the ticket checker said we had to move on. The bridge collapsed the moment we stepped on it,” he said.

The part where Mahesh and his friends were standing flipped over and they were thrown into the river 15m (45ft) below.

The three teenagers were injured but survived.

But scores of others didn’t and the disaster has destroyed many families who had multiple members killed while out for an evening stroll over the river.

Many people are now asking how a tragedy of this scale could happen and why was it not prevented?

The bridge was thrown open to the public last Wednesday, to coincide with the Gujarati new year.

A day earlier, Jaysukh Bhai Patel, the owner of Oreva group, the firm contracted to maintain and operate the bridge since 2008, told a press conference the renovation work had cost 20 million rupees ($242,000; £211,200).

“Nothing will happen to the bridge for the next 8-10 years. And if it’s used responsibly, the bridge will need no repairs for 15 years,” the Times of India quoted him as saying.

He is reported to have lauded the quality of the repair work, the machinery and the contractor the firm had hired.

Since Sunday’s accident, police have arrested nine people associated with Oreva – including two managers and two ticket clerks on its payroll, as well as two contractors and three security guards it had hired.

They are being investigated for culpable homicide not amounting to murder.

At a press conference on Wednesday, public prosecutor HS Panchal said that the two contractors to whom fabrication work had been given by the company were “unqualified” for the task.

“Despite this, these contractors were given repair work of the bridge in 2007 and in 2022,” he said, adding that they were further investigating the matter.

A forensic report presented by the investigating officer in court said the flooring of the bridge was replaced at the time of renovation but its cables were not, and that the old cables could not take the weight of the changed flooring.

A police officer also told the court that the cable was “rusted” – and that the tragedy could have been avoided had they been repaired on time.

The BBC has contacted Oreva to ask for its response to the allegations it faces.

In court, one of the accused – a company manager – termed the bridge collapse an “act of God”, the prosecutor said.

Earlier in the week a company spokesman told the Indian Express there were too many people in the mid-section of the bridge, and some had been trying to make it sway.

Oreva has also been accused of other lapses, including failing to secure permission from the authorities to operate the bridge.

Local municipal chief Sandipsinh Zala told reporters on Monday that Oreva had not been given a safety certificate before reopening it.

But many are questioning why a company known for making clocks was allowed to maintain a bridge. It also makes lighting products, battery-operated bikes and home appliances.

Mr Zala did not answer our calls or respond to our messages, but an assistant in his office told me that Oreva had first won a contract to lease the bridge from the district administration in 2008.

“Mr Zala has just renewed that contract in March,” the assistant added.

The BBC has seen a copy of the agreement which is valid for 15 years – until March 2037.

It says that the maintenance and security is the responsibility of the firm which also keeps the proceeds from the ticket sales.

According to the document, the firm is allowed to price tickets at 15 rupees for adults and 12 rupees for children, but it was charging a premium of 2 rupees on each ticket.

Authorities have promised a full inquiry and a special investigation team has been set up to look into the causes of the disaster.

Who’s to blame for overcrowding?

By all accounts in Morbi, what led to the collapse was the sheer number of people who were allowed onto the bridge at the same time.

Most people say at the most there should have been 100-150 people on the bridge, but many eyewitnesses estimate that there were upwards of 500 people on it.

Senior journalist and long-time Morbi resident Pravin Vyas, who lives close to the bridge, says he had never seen it so crowded before.

“Locals and tourists had turned up in such large numbers since it was a Sunday and the last day of the week-long Diwali vacation. Many were also happy to be out celebrating after two years of Covid-19 restrictions,” he said.

“It’s the management’s responsibility to see how many people can be safely allowed at any moment on the bridge. But it benefits them to allow more people because entry is ticketed,” he added.

Mr Vyas says the town administration and the police are not without blame either.

“There were thousands of people visiting the bridge every day since it reopened, so the authorities can’t say they didn’t know about it because Oreva didn’t seek permission from them.”

Critics wonder how an area that drew thousands of locals and tourists every day lacked safety measures to deal with an emergency?

How come there were no policemen nearby, no divers and no boats, they ask.

The district administration insists that ensuring the safety of visitors was the responsibility of the company.

Additional District Magistrate NK Muchhar told me he was proud of how quickly they had responded to the crisis and the massive rescue operation they had launched which had saved lives.

“We got divers, swimmers, ropes, boats and fire services here in 10 minutes,” he said.

Many however point out that the toll would have been much higher if not for first responders who included locals and a group of nearby labourers building a new temple on the river banks.

Niranjan Das had just finished his day’s work at the temple site and was sitting with his colleagues on the side of the bridge, watching as dusk enveloped the town.

“We saw people clinging onto the bits of the bridge,” he says.

Ropes from the construction site were used to lower him and seven of his colleagues into the water.

“We saved eight people and pulled out dozens of bodies.”

He points to injuries on the hands and feet of a colleague who also participated in the rescue.

Parbat Govind, a 61-year-old who moved to Morbi two years ago and supervises the workers, was at the temple too, and watched the tragedy as it unfolded.

“Those wounds will heal,” he said. “But we will never forget what we witnessed that day. We will never be able to forget those screams.”